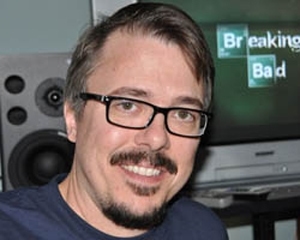 Traverse City National Writers Series: Screenwriter and showrunner Vince Gilligan is the creator of one of television’s most critically acclaimed dramas, AMC’s dark hit Breaking Bad. Now entering its fifth and final season, the provocative series follows meek chemistry teacher Walter White (played by three-time Emmy-winning actor Bryan Cranston), who turns to a life of crime after being diagnosed with terminal cancer. Entertainment Weekly, NPR, Hollywood Reporter and Paste magazine all named the show #1 on their lists of 2011 Best TV Shows, with Stephen King naming the program #1 on his list of 2011 Pop Culture Favorites, hailing it as “an American classic.”

On Saturday, February 4, Gilligan will take the stage at the City Opera House in downtown Traverse City as the kick-off to the 2012 season of the National Writers Series (NWS). He will discuss the show’s award-winning writing from “page to pixel” with Traverse City National Writers Series founder Doug Stanton, and will also share his experiences on other popular Hollywood projects, including his role as an executive producer and writer on The X-Files, co-creator of The Lone Gunmen and writer of such films as Hancock and Home Fries. MyNorth spoke to Gilligan in a recent phone interview about the inspiration behind Breaking Bad, the show’s highly anticipated final season and the influential year he spent in Northern Michigan as a teenager at Interlochen Center for the Arts.

MyNorth: Most TV viewers are familiar with the narrative premise of Breaking Bad: A high school chemistry teacher learns he has cancer, and – in desperation – turns to a life of crime to earn money to leave behind for his family when he dies. Beyond the narrative, what was your vision on a thematic level for the show?

Vince Gilligan: When I first thought of the idea for Breaking Bad, I was thinking of mid-life crises. I was about to turn 40, so that was front and center on my mind. (laughs) Walter White is a man suffering from one of the world’s worst mid-life crises, which then becomes an end-of-life crisis when he learns he’s dying of cancer. While writing, I was thinking of men who live lives of quiet desperation, as the poet says. But mainly, I was thinking: “What’s the most entertaining and original story I can tell?” That’s all any writer can think about at any given moment.

MyNorth: It’s interesting from a timing perspective that you’re kicking off the 2012 season for the National Writers Series, as the guest who wrapped up the 2011 season was Chuck Klosterman, who discussed Breaking Bad extensively on stage and also wrote a popular essay on Grantland.com about the show. Klosterman praised the series as better than The Wire, The Sopranos and Mad Men, in large part because of its moral clarity, saying: “There's one profound difference between this series and the other three, and it has to do with its handling of morality: Breaking Bad is the only one built on the uncomfortable premise that there's an irrefutable difference between what's right and what's wrong, and it's the only one where the characters have real control over how they choose to live.” Could you comment on that?

Vince Gilligan: I read that essay, and it pushed the circumference of my head about five or six sizes. Chuck is a wonderful writer – I was very honored by that. Deep down inside, I truly believe in right and wrong, and in karma. I have to believe there’s a right way to live your life and a wrong way. My girlfriend always says to me: “I’m not sure if there’s a heaven, but I have to believe there’s a hell. I have to believe people like Hitler wind up paying for their sins.” We try hard as human beings to create justice or a sense of justice in our civilizations and lives, but it’s fallible and often fails. So we desire to believe that there’s some universal justice out there, beyond our fallible human system of justice.

Walter White is the ‘hero’ of Breaking Bad, but I use that term very loosely, because he’s no hero of mine. He’s a bad guy. He started off as a good man who had justifiable reasons for the bad decisions he was making, but as the show has progressed, the ends are less and less clear. Walter is less concerned with his family and more concerned with his own self-aggrandizement. Our hero has become, episode by episode, a villain. I feel like what he’s doing is wrong, and having said that, he’s probably in for some payback.

MyNorth: It’s a fascinating writing experiment, because it’s hard to recall any other show in recent history where the showrunner has taken the protagonist and slowly turned him into the antagonist, to the degree where the audience is now essentially rooting for an evil character. Do you get the sense viewers are starting to turn on Walt? And how difficult will it be for you to deliver payback to a character you have such a strong affinity for?

Vince Gilligan: That’s a great question. The challenge for me is to not wimp out. There’s a desire on the part of writers to write likeable characters – it’s an innate drive to want to please your readers or viewers. But Breaking Bad has been an experiment in television, as you said. Walter White has come very far down the road of badness, and he’s pretty much an indefensible guy at this point. Viewers have noticed that, but it was interesting to me that they hung in there liking Walt as long as they did. It points out interesting things about the storytelling process. When we choose to invest in a story we’re reading or watching, we invest a certain amount of psychic energy into the main character, and therefore it can be hard to come to the grips with the idea that this character may not be worth sympathizing with. My hope is that even if viewers lose sympathy for Walter White, they will remain interested in him. He’s a fascinating guy.

MyNorth: Your lips have been sealed on the narrative details of season five, but Klosterman had a theory on how the show will end that he shared with the Traverse City audience while he was here. He said: “My theory, or rather my hope, is that they’re now going to try to transition Walt back into his old life. And he’s going to have to make a decision – is he an ordinary teacher and family man, or is he a criminal? What’s his true identity?” What’s your take on that?

Vince Gilligan: I think that’s very astute. I can’t comment yay or nay on whether we’re actually going to do that, because I don’t want to spoil anything for viewers. But it does point to the fact Walt now has this dual identity. He’s kind of like Dr. Jekyll and Mr. Hyde. As readers and viewers, and for me as a writer, we find these kinds of characters with double lives endlessly fascinating. Excellent writer that Chuck is, it sounds like he’s noticed the inherent dramatic tension available to those of us writing the show that stems from Walt’s public versus his private life, which is astute. Again, I can’t say if that’s exactly the way we’ll go, but it does sound like a damn good way to go. (laughs)

MyNorth: There have been a number of controversial endings to popular series in recent years: Lost, The Sopranos, Big Love, etc. Having one of the most critically acclaimed shows on television right now, are you feeling the pressure for the series finale? What’s your hope for what the lasting legacy of the show will be?

Vince Gilligan: Oh man, yeah – I’m feeling the pressure. I try my best not to think about it, but it’s always there. I keep telling myself it’s a high-class problem to have – one I’m lucky to have. It’s a much better problem to be worrying about these last sixteen episodes than to never have had Breaking Bad on the air in the first place. As a way of venting pressure, I have to tell myself that no matter what we do, there will be some people who appreciate the ending and others who will have wanted us to end it another way. You have to temper your own expectations – I don’t say that to temper anyone else’s. But you also have to commit. I think the least satisfying series endings have been ones where the creators didn’t fully commit and tried to leave things vague or open-ended. I believe fortune favors the bold when it comes to television, so those are my marching orders to my writers. That’s how we are proceeding.

MyNorth: It sounds like your attention is completely focused on this last season of Breaking Bad, but have you given any thought to what you’d like to do once the show wraps?

Vince Gilligan: I’ve always wanted to direct movies. That’s just something I can’t shake from my childhood. The shame of it is that right now, Hollywood has never been less interesting and TV has never been more interesting. There’s the old expression, “You’ve got to dance with the girl who brung you.” I should just stick with television, because it’s the most satisfying job I’ve ever had. But it can also grind you down to a nub. Even though I love it and should stick with it, I’ll probably be stupid and go off and try to make movies when Breaking Bad is done. (laughs)

MyNorth: The National Writers Series event this Saturday is a homecoming of sorts for you, as you attended Interlochen as a ninth grader and are now returning to the area after thirty years away. What impact did the school and your time here in Northern Michigan have on your creative development as a teenager?

Vince Gilligan: I loved my time at Interlochen. I had never lived away from home before or spent more than a night or two away from my sheltered little life in Virginia before going to IAA. It was a wonderful, eye-opening experience. I had excellent teachers – I studied visual arts. My favorite class was Mr. Church’s metalsmithing class. I made a pair of silver earrings that my mom to this day still wears from time to time. The setting of Interlochen, too, could not have been more beautiful. Even though I haven’t set foot in Michigan in thirty years, I still remember it vividly. I’m very much looking forward to this weekend, because Northern Michigan is a beautiful area of which I have very many fond memories.

An Evening with Vince Gilligan, a National Writers Series event, will take place on Saturday, February 4 at the City Opera House in Traverse City. Doors open at 6 p.m.; the event begins at 7 p.m. Tickets are $15 in advance or $20 at the door ($5 for students and $10 for educators) and are available at the City Opera House box office or online at cityoperahouse.org. The evening will include a pre-event live performance by singer-songwriter Levi Britton as well as an audience Q&A and post-event cash bar reception and DVD/poster signing with the author. For more information, visit nationalwritersseries.org.