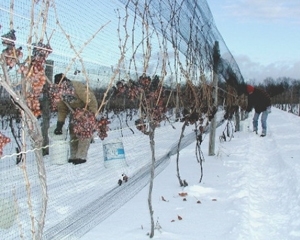 Northern Michigan News: Traverse City was recently announced as one of the 11 Coolest Places in America by MSNBC. Time to celebrate, folks!

Another shout-out for Northern Michigan! MSNBC travel writer Sean O'Neil placed Traverse City on his list of the 11 Coolest Winter Places in America, specifically calling out ice wine and Chateau Grand Traverse. Among his list of America's Most Thrilling Winter Activities was dog sledding in Maine, skiing in Utah and snowshoeing in Wisconsin, and while Northern Michigan boasts all of these winter activities itself, we've got one thing the others don't—ice wine.

That's right wine-lovers! Northern Michigan scores yet another national recognition for its exceptional wine scene. We agree with Sean—there's no better way to end a winter's day then sipping a glass of ice wine.

A temperamental wine requiring very specific conditions, ice wine is mostly produced in Germany and Canada, with few US locales harboring the appropriate climate and temperature needed for a succesful harvest. Traverse City, however, is not only "graced with panoramic views of Lake Michigan," Sean explains that "the cold air coming off the lakes is perfect for chilling grapes." Wineries situated along the infamous 45th parallel are able to leave their grapes on the vine after the traditional harvest season has ended, allowing them to freeze in Northern Michigan's chilly winter air and attain the correct temperature needed for ice wine.

Also on MSNBC's list of America's Coolest Winter Places is the Porcupine Mountains of Michigan's Upper Peninsula, affectionately known as the Porkies. With 92 square miles of terrain for cross-country skiing, its the perfect place to experience the pristine beauty of Northern Michigan's winter wilderness.

That makes two nods to Michigan, the only state to appear twice on MSNBC's list of 11 Coolest Winter Places in America!

Experience it for yourself! Read More About Northern Michigan Ice Wine.

Discover everything Northern Michigan at MyNorth.com!