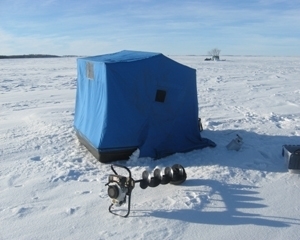 There was a year when Tony’s mother forgot all about Christmas. None of us was surprised, and nobody blamed her. She had other things on her mind.

Tony and I lived a few houses apart on Long Lake and for years had spent many of our spare hours together, exploring the lakes and woods near home. We knew each other like brothers. He was fourteen that winter, skinny and so tall he was in the habit already of stooping at doorways. His father had died in August, after a long illness, and Tony had decided he was responsible for two little brothers who had to be kept away from matches and knives, and for a thirteen-year-old sister who was nearly as tall as Tony and possessed not a trace of respect for his authority. He had decided also that it was his duty to cheer his mother for the holidays and that a dinner of baked grouse and pike fillets would distract her from her troubles. I came from a turkey and ham family myself, and was a stickler for tradition, but I went along with Tony’s plan because he was my friend.

In those days we sometimes hunted grouse with my dog, Lady, a fat-as-a-sausage beagle who in her prime had been known to climb trees after squirrels and was the only beagle I have ever heard of that would point birds. She had grown up with a pair of my father’s Brittany spaniels and had learned to lock into a rigid, trembling, belly-to-the-ground point whenever she scented a game bird. You could trust Lady’s points, but she was easily distracted by rabbits, squirrels, and deer. You also had to watch her around raccoons, porcupines, and skunks.

Tony and I had one gun between us, a sleek and ancient single-shot twelve-gauge that kicked like a howitzer and had been presented to me with formal solemnity on my twelfth birthday. It had been my father’s first gun, presented to him by my grandfather, and it was understood that I would eventually pass it on to my own son or daughter. It was my most treasured possession, a man’s gun, and I was more proud of it than anything I owned. The day after I received it, my father had taken me to his duck blind at the Mud Lake Flooding, where I promptly dropped a drake mallard that rocketed past at sixty yards. It was the only bird I ever got with that gun.

Over the years, Tony and I shot at a lot of grouse with my shotgun, but we never killed one. They were too fast and evasive for us. We would watch them thunder away, not a feather ruffled, and shake our heads and laugh. If it had been Tony’s turn to shoot, he would hold the gun up and admire it. “This is a sweet shotgun,” he would say. I agreed. “You take good care of this baby,” he said. I would. I promised. But more often than not it was he, not I, who cleaned it at the end of a day of hunting.

Our effort to shoot a grouse for Christmas nearly failed because the snow was so deep that poor Lady could not keep up with us. She was forced to practically tunnel through the woods and kept going off in random directions, whining in frustration, and snorting up little spouts of snow. She finally flushed a grouse from dense hemlocks, but it flew off on the far side of the trees and all Tony and I saw of it was the trail of sifting snowfall as it passed through a stand of evergreens.