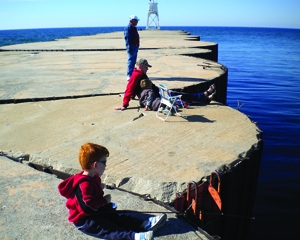 Northern Michigan Vacation: Our tradition started about four or five years ago. I was a new single dad with two kids—a 4-year-old son and a 6-year-old daughter. And a friend of mine, Ron, a big fisherman, asked us to come up to Grand Marais and camp. He was going to bring along his girlfriend and her kids. At first I was leery, taking the kids by myself and doing that. But I finally agreed to do it, and it was one of the best experiences we ever had. Now we love it. We do it the first weekend or so when the kids get out of school for summer; it’s the kickoff.

One nice thing is that time of year, the whitefish are in close, so you fish for them right off the pier. You don’t need a boat. And the campground is just outside of town, so we can ride our bikes into town, ride to the pier to fish. Back then, the kids were little, so they wouldn’t put bait on the hook or take fish off the hook. But they did catch fish. That first year Ethan would have been 4, and he hooked probably the biggest whitefish anybody had seen all weekend. He had him on the line and got him right up to the breakwall, and the fish was slapping around on the breakwall and broke the line and got away. All he could talk about that whole weekend after that was going back to get that fish.

We’ve had years where we barely catch a fish and others where we catch fish all day long. That’s another tradition: the fish fry. We have a big crock of oil and we deep fry battered whitefish and onion rings and french fries. It’s a shoreside meal right there in the campground.

Other things we like about Grand Marais? You have that whole Pictured Rocks National Lakeshore stretching to the west, and all those polished, washed-up stones make it great for rock picking. Also, we do meals in the campground, but there’s a little diner in Grand Marais in an old train car, and the kids love going there and getting into a booth and having ice cream. Now that I’m engaged, we all go up together—my fiancée, her two children, me and my two. And everybody has a great time.—Brian Eckerle

Find more Northern Michigan vacation stories in our July issue, on stands now or in our virtual store.
X
X