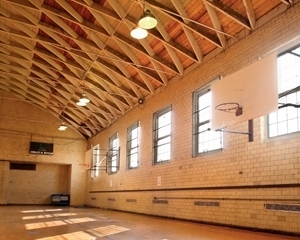 A hundred years ago Ed Burling set Michigan’s state record—which still stands—for individual scoring in a single basketball game. How is this possible?

In 1911, the Upper Peninsula’s Crystal Falls was a rough-and-tumble mining town where men wrenched fortune from hard rock and frontier rules applied. The place had an unbridled spirit, and as such it made a fitting backdrop for one of Michigan’s most spectacular and mysterious athletic feats. On a cold winter night in a “cracker box” high school gym, a soft-spoken boy named Ed Burling scored 97 points in the relatively new sport called basketball.

Nearly a century later, Burling’s feat stands as the state record for points scored in a high school game by a single player. Unfortunately, the details of the game have dropped into darkness, as if they were tossed down one of the mine shafts that littered Crystal Falls’ rugged landscape, and some sports fans question the record’s legitimacy.

No one knows the date of the game. No one knows how one player piled up nearly 100 points when teams didn’t produce that many for an entire season. No one knows why Burling’s heroics—which helped Crystal Falls defeat rival Iron River, 107-27—didn’t earn a mention in the local newspaper. In fact, the news took 50 years to emerge, and state high school officials are still scratching their heads over the mark.

“It looks completely out of whack,” admits Ron Pesch, historian for the Michigan High School Athletic Association. “I don’t see any way in 1911 that Crystal Falls could have scored 107 points unless there were extenuating circumstances. How the heck could this actually have happened?”

Basketball, of course, was a different game back in 1911—just 20 years after inventor James Naismith’s wrote the first rules. At the time, a center jump followed each basket, and teams could send their best shooters to the foul line regardless of which player was wronged. Brief mentions of the game imply Burling served as Crystal Falls’ designated foul shooter, taking and making a slew of free throws.

The 97-point achievement made sense to Bob Flood, Burling’s late nephew who lived in Crystal Falls until his death at 90 years old in 2010. Flood, however, admitted his uncle never told him much about the historic game. “All he said was, ‘They just kept giving me the ball,’ ” Flood remembered in 2007.

Even so, it’s difficult to picture one player scoring nearly 100 points at a time when most games were like Crystal Falls’ 13 to 12 victory over Iron Mountain in February 1911. That contest, according to Crystal Falls’ Diamond Drill newspaper, ended because the angry visitors “disputed a decision and withdrew from the floor.”

It’s equally difficult to imagine Burling’s achievement not warranting some ink, if only for its gaudiness, though, granted, basketball was not big news at the time. When the high school team’s results made the paper, they generally were buried in a “school notes” column in the back. Still, the Diamond Drill did not mention Burling’s feat.

The losing team, Iron River, had a newspaper in town, too. It’s not known if the Iron River paper documented Burling’s 97-point outburst because the archives before 1921 were destroyed.

The credit for digging up Burling’s accomplishment generally goes to Dick Mettlach, a long-time Crystal Falls High football coach who unearthed the nugget in 1961 while working on a master’s thesis about the school’s athletic history.

But if you’re counting on Mettlach to clear up the situation, you’re out of luck. He remembers seeing a newspaper account of the game supplied by Burling’s wife, Lodovine. But he can’t remember which paper. And he can’t recall talking to Burling, who was alive at the time.

“It’s just as vague to me as it is to you,” Mettlach said in late 2007. “I have no idea. But everybody else up here seems to think that’s the way it was.” Malcolm McNeil has no doubt. A Crystal Falls sports fan, promoter and historian, McNeil said he—along with several newspaper reporters—interviewed Burling about the big game after the news surfaced in the 1960’s.

One question that dogs Michigan high school sports officials and fans is should the MHSAA recognize a record that’s shrouded in doubt and so difficult to verify?

“That’s what I’ve been wrestling with for about the past 10 years,” says MHSAA historian Pesch. “You’ve really got to look at it and say, Is this plausible?”

Pesch said the record stands largely on the honor of his predecessor, the late Dick Kishpaugh, who inserted Burling on top of the MHSAA’s record books. Pesch trusts that Kishpaugh checked out Burling’s claim, probably with the help of longtime Marquette Mining Journal sportswriter James Trethewey. Still, he yearns for solid proof.

“My assumption is they had some document in hand and said, Yep, we’re buying into this,” Pesch said. “That’s why I’ve been very hesitant to yank it. But this is one I can’t prove. It’s really a mystery.”

Burling, too, remains a mystery, though considerably more is known about the man than his epic mark.

He was born on Nov. 14, 1893, in Minnesota, the son of a miner who presumably followed the iron ore rush to Crystal Falls.

Burling stood a touch over six feet tall, which was unusual for the time and couldn’t have hurt on the basketball court. He earned a degree from Albion College and conducted graduate studies at the University of Michigan. He manned a machine gun in World War I. Burling possessed a variety of talents, counting teacher, city treasurer and postmaster among his various careers in Crystal Falls.

People described him as “quiet,” “well-liked,” and “easy going.” He was the kind of guy elected captain by his basketball teammates. The kind of guy who later liked to swig Budweiser with his buddies at the local American Legion hall.

But even when the beer started flowing, Burling kept the epic tale of his record bottled up. “He was real quiet, humble and intelligent,” McNeil said. “He didn’t bring it up unless somebody else brought it up.”

Burling, who didn’t marry until he was 46 and had no children, died in 1969. Fittingly, his obituary in the Diamond Drill failed to report his basketball exploits. His grave marker, tucked in a quiet corner of a cemetery just outside town, does not mention his glorious 97-point game.

Perhaps Crystal Falls will eventually divulge more clues about Burling and his century-long basketball record. But with each passing year, that likelihood diminishes.

Either way, the MHSAA’s Pesch plans to keep digging for the details of what unfolded in Crystal Falls a hundred years ago, hoping to strike something solid and true.

“I’d love to be proven wrong,” Pesch said with a chuckle. “The [evidence] I have casts a doubt. But it’s tough to take these accounts and just ignore them. It’s legend now up in Crystal Falls.”