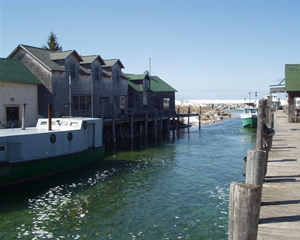 Northern Michigan Preservation: Sleeping Bear Dunes National Lakeshore made headlines across the country when it was voted Most Beautiful Place in America by Good Morning America; now it's time to help add Leland's Fishtown to Northern Michigan's list of nationally recognized landmarks.

Dwell magazine has partnered with Sub-Zero in a new contest dedicated to Rethinking Preservation. With a belief that "designing for the modern world begins with honoring the precedents of the past," Dwell asked readers for submissions of national landmarks accompanied with arguments for why they deserve preservation. Judges will pick a winner on February 20th based on the most popular vote, and award $10,000 to the organization that values preservation in the region where the winning entrant's landmark is located.

Out of the dozens of entries Northern Michigan's historic Fishtown, located in the quaint town of Leland, made the list of nominations!

Following is the submission that won Fishtown a place on the Rethinking Preservation contest ballot: "Fishtown is an historic fishing village in the little tourist town of Leland. Thanks to the generous support from individuals and foundations, Fishtown Preservation Society was able to acquire Fishtown and keep it's historic integrity instead of having it demolished and turned into condos. Fishtown continues to have commercial fishermen along with numerous tourist charters, which is great for our local economy. This is definitely a worthwhile endeavor and something that should never be forgotten…."

Now it's time to rethink preservation in our own community by voting for Leland's Fishtown in Dwell/Sub-Zero's Rethinking Preservation contest! Your vote will help to award $10,000 to the Fishtown Preservation Society– the local non-profit dedicated to preserving Northern Michigan's one hundred year old active fishing village for generations to come.

"Fishtown Preservation Society just celebrated its five year anniversary last week, and we are proud to be where we are," says Meaghan Murphy, business and development manager for the Fishtown Preservation Society. "There is still so much we want to accomplish, however. We have a lot of new plans for this summer, including the unveiling of an on-site interpretation, all of which require funding. The Rethinking Preservation award would help us fulfill the initiatives we have set forth in our mission to preserve and maintain Fishtown. We have already seen a huge effort to raise awareness of this contest from our supporters in Leland and the local community, and we encourage everyone to vote for Leland's Fishtown to continue its preservation."

Click here to vote for Fishtown and help award $10,000 to the Fishtown Preservation Society! Voting lasts through February 20th. Multiple votes per person are accepted (and encouraged)!

Read about Fishtown's historical background in the article "The Fisherman Who Saved Fishtown," and how the Fishtown Preservation Society acquired Fishtown.

"The Fishtown Preservation Society seeks to preserve the historical integrity of Leland, Michigan’s Fishtown property and ensure that it continues as a publicly accessible and authentic connection to local and regional history, Great Lakes commercial fishing, and maritime traditions and experiences." – Fishtown Mission Statement