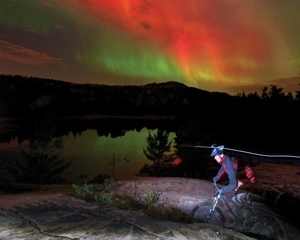 Northern Michigan Outdoors: When our favorite Upper Peninsula correspondent, Aaron Peterson, sent us an image of a mountain biker beneath a fantastic aurora borealis, we were stunned by … well, lots of things. The straight up beauty, the skill, the concept. We had to know more.

So how’d you happen to be out shooting a mountain biker at night in October?

I had some night-biking concepts I’d been wanting to shoot, stuff with long exposures and star trails. Do some hourlong exposures then have the rider come through with a headlamp and hit him with a strobe. That sort of thing. And my riding friend was leaving town in a few days and it was a clear night, so we pulled the trigger on it.

From here we could shoot north, putting the North Star at the center of the image to get circular trails. I’d scouted a couple of places north of Marquette with the rider, Kristian Saile. We’d chosen this place, the Wetmore Bog, near Hogback Mountain. It’s part of the Huron Mountains. My friend is a really good sport and a good rider—you don’t want to take a novice out riding along 50-foot cliffs at night.

But a photo of star trails isn’t what you got.

No. The first couple of tests were blown out—the sky all washed out—because during the long exposure, the camera was collecting light from the low aurora that was just beginning at the horizon, but that our eyes couldn’t detect. We sat there scratching our heads trying to figure what we could do. I thought maybe it was light pollution, but we were shooting north and there aren’t any cities that direction.4

So when did you realize what was coming?

We started to suspect it was an aurora, and then probably a little before eight it became visible to us, but we weren’t sure how long it would last or how strong it would get. So we really had to scramble, figure out what we would do. We had to go to a new area because of where things were happening in the sky, set up a new shot, put out strobes and sensors. And the aurora kept building and building.

What was the trickiest thing about the shot itself?

An aurora is a moving thing, the light wavers, pulsates. You need an exposure long enough to gather the relatively dim light, but fast enough to stop the wave action of the aurora. Too long and it washes out. Too short and it’s dark. The best shots came in at five to 10 seconds.

Did you ever stop to just stare at it, just take in the wonder of the aurora?

That’s the kind of funny thing, or who knows, maybe sad thing. When I’m working I’m working. It’s all I do. I don’t remember looking up once. But I think a lot of journalists can relate to that. And it all happened fast, I mean, the peak was only from about 9:30 to 10. I suppose I could have just stopped and looked up. But working at night there’s so many things. Danger of where you step. Where to put the strobes. Whether the rider will hit the mark you’ve picked for focus. That headlamp leaves a streak through the picture—you want to get that a certain way. And there’s trial and error. I kept 30 images, I don’t know how many I killed.

Did you ever get the star trails shot?

Nope. After the peak we stayed out shooting, and the last shot was about 12:30, but no, we never got the shot we came out to get.