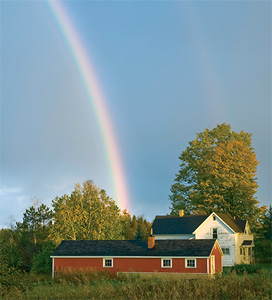 Northern Michigan Living: If it were possible to make love to a house, I'd be a cheatin' man.

For more than a year I've been engaged in a headlong, 100-mph affair with a very mature, white-clapboarded beauty. I'm infatuated with her build, layout and 40-acre dowry, but I think she just digs my tool belt.

Now, I'm no stranger to romantic notions. As a woodsy type with a gooey center, I end up gaga over something almost weekly. But the feeling's only been this strong once before, when, nearly 12 years ago, the object of my affection was a girl wearing a blue-and-white swimsuit at a county park picnic. It was two weeks after high school graduation, and I remember a spinning sensation, shortness of breath and that watery, flowery smell of June when spring ripens to summer. Everything was changing, and I'd found someone totally familiar, yet tantalizingly unknown, to relearn life with.

Love is dangerous stuff, and that little fling led to marriage. These days my wife and I are as mad about each other as ever, but since finding this old farm, I've been rolling head over heels down a white-picketed path of debauchery.

My family and friends are ashamed. I know what they're all thinking: She's got to be 80 years older than he is. I feel myself changing too, taking on her mature tastes. The weather has suddenly become very important. My favorite magazine has changed from National Geographic Adventure to Mother Earth News. Now, taking a year off and sailing the world doesn't sound nearly as important as growing fields of basil and really, really big tomatoes.

Some might think this is a midlife crisis, but that means I'll be dead by 60, so I hope not. Perhaps it's a quarter-life crisis. Whatever it is, the affair has helped me recapture my manhood, boosted my confidence and helped me open up to trying new things. It's fair to say my wife is impressed with my new skills as well.

I'm no Casanova, and the house has never said anything, but I get the feeling it's been good for her, too. It has been more than 10 years since anyone has touched her the way I do, and I imagine she's starting to feel young again with all this attention. When I met the house, she was like a centerfold in a snowmobile suit. Underneath the electric-blue wallpaper and peach-colored plasterboard was a lady of hewn, dovetailed logs. Since we've been together I've given her new wiring, windows, paint and lots of other little things a lady her age needs.

Of course it hasn't all been rosy. The house doesn't have a central heating system, which can be a problem in the Upper Peninsula. Plus she makes a lot of strange noises when it's windy, and then there's the whole issue of the damp crawl space. Let's not go there.

I admit, when things get rough I walk out on her, but a stroll through the woods to think things over always leads me back to the corner of the yard, where I can catch a flirtatious glimpse of her backside. There, standing in the berry patch where a rutted tractor path meets the old orchard, I trace the sinuous line of a blonde woodpile and watch the house through a frilly tease of apple blossoms. It's a view that leaves me red-faced and smiling, shuffling my feet and staring at the ground, like that gangly high school grad blinded by a blue bikini.

Lately my wife and I have been talking about the future and where this affair is headed. I want wraparound porches and an addition for the house. She agrees and even supports the purchase of new power tools. But there's a catch. Now that we're settled here, she'd like an addition, too. An addition to the family. Maybe even three or four of them.

Time to get my tool belt and get back to work.