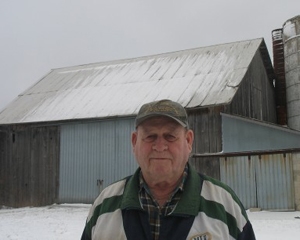 The Leelanau Conservancy has been protecting land on the scenic and agriculturally-rich Leelanau Peninsula for 25 years. The story of the Noonan land, below, is a lovely  illustration of the way the conservancy and the community work together to preserve valuable and beloved pieces of the Northern Michigan landscape.

Northern Michigan: When I first moved to Leelanau County 25 years ago, one of the names I kept seeing in the newspaper was Glen Noonan’s. At the time, he owned the county landfill, a gravel pit, and a whole lot of farmland. I got the impression that if Leelanau County had a patriarch, this guy would certainly be in the running. Forty-two years serving on the County Road Commission and his role as a founding member of the Cedar-Maple City Lions Club gives him an iconic status.

Here at the Conservancy, I often hear him referred to as “a farmer’s farmer.” I recall that at the public forum about the farmland millage in 2006, all heads turned and a hush came over the Suttons Bay Auditorium when Glen stood up to speak his mind.

And so as I drove out one day to hear his story about why he was protecting a significant portion of his land with a donated conservation easement, I didn’t know quite what to expect. I’d been told that he was a shrewd, successful businessman; that he could be blunt. Both of those things are certainly true. But what is even truer is that underneath that exterior is a fascinating, sweet guy who is passionate about keeping his family lands intact. “The good Lord has been awful good to me and my family,” he says. “I love this property—it’s very dear to my heart, and I’m very proud to have turned it over to the care of the Leelanau Conservancy to make sure it is always protected.

With the preserving of his 506 acres, Glen has become the single largest conservation easement donor in the history of the Leelanau Conservancy. No single landowner has protected more acreage to date. While the Conservancy does not own the land—the Noonan family does—the conservation easement ensures that Glen’s wishes for the property will be adhered to in perpetuity.

Two separate parcels have been protected. The first is 200 acres in Empire Township, known as the “kettle hole property.” It contains a unique geological feature, a 100-foot deep conical depression in the earth caused by the melting of a buried block of glacial ice. Many local geologists consider it to be one of the largest and best preserved geologic kettles in Michigan. Also present on the land is 700 feet of Hatlem Creek frontage and 132 acres of hardwood forest. A forest management plan will allow the Noonan family to sustainably harvest trees from the property and continue to farm the tillable acreage.

The second parcel on Polack Lake in Kasson Township is the one that Glen is most attached to. He grew up in a house near the property and although his family did not own the land, as a young man he vowed that someday he would. Glen is one of 11 children whose mother died when he was just seven. He recalls gathering firewood and gooseberries with his father, watering cattle at Polack Lake as a young man and later, hiking and fishing at Polack Lake with his own family. Today, the land is the site of huge family reunions and Glen also generously allows the Boy Scouts to camp here. The Lions Club, of which he is a founding member, holds a Christmas tree sale here annually, and the Noonan family donates the trees.

Glen’s first love has always been farming, a vocation he has doggedly pursued all his life. After graduating from high school, his one goal was to save enough money to buy a piece of land in Leelanau. He tried to enlist in the army but a childhood injury that left him without the use of two fingers on his right hand caused him to be rejected. He ended up joining the Merchant Marines, which took him to places like Russia, Turkey and the Black Sea.

After that he and a friend headed west, looking for work. An uncle in Nebraska had a potato farm, where they worked for a bit. Word of jobs harvesting wheat drew them to Kansas, then to Idaho to labor in sugar beet fields. His travels gave him the perspective that “Leelanau County is one of the most beautiful places in the world as far as I am concerned. I don’t think there is any place to compare to it. It’s the beauty that attracts people and I think that through zoning we can make sure things stay the way we want them to.”

While out west, he met Ella, his wife of 62 years, who worked at a bank. “I would always try to have an excuse to stop in at the bank,” he says. “But really, it was just so I could keep track of her.” He brought her home from a dance one night—and ultimately to Leelanau County once he had saved enough money to buy his first 80-acre parcel.

He found out, however, that he couldn’t make a living just on farming; thus his forays into the tavern and landfill business. He describes himself as a risk-taker who goes with his gut. “I’ve never taken two or three days to make a decision,” he says. “Never have, never will.”

Preserving his land through a conservation easement, he says, was one of those gut-level decisions that he knew was the right thing to do. “No matter who owns the land it will be kept intact,” he says. “It’s a beautiful piece of property and they aren’t making any more of it.”

Two of Glen’s seven children—twins Roger and David—are passionate about carrying on Glen’s farming legacy. Together they farm 1200 acres, including portions of the now preserved lands, and their operation includes field crops, cattle and cherry orchards. By preserving the land, Glen has assured that property taxes won’t be “uncapped” upon transfer and that the agricultural fields will always be available for farming.

Roger, who was the one who urged his father to contact the Conservancy, says “My dad always wanted to get this done. I would give praise to Tom and Matt*; they made the process a lot easier. They were very up front with no hidden agenda. They are the kind of people we like to work with. A lot of people think that the Conservancy has a hidden agenda. With us there was NOTHING on that order and we’re very happy with our experience.” (*Tom Nelson is the Leelanau Conservancy’s Director of Farm Programs; Matt Heiman is the Director of Land Protection.)

Throughout the months that the Noonan family and the Conservancy were working out the details of the easement, Ella’s health was in decline. She died in September. Glen recalls how hard she worked to take care of their large family, how she helped to milk the cows and kept the milk tanks “super clean.” “She always liked to have a good garden, canned a lot of fruit and tomatos, and helped to write the history book about Kasson Township,” he adds. “She loved Polack Lake too.”

At her service, he told Farmland Programs Director Tom Nelson that in his mind, he was dedicating the preservation of the property to Ella’s memory. “It was an honor for us to work with the Noonan Family,” says Tom. ”It was clear from the start that they see this land as an extension of themselves. As such, it’s a big part of their identity as a family. And, just like their family, their love of this land runs deep.”

Click to find out more about the Leelanau Conservancy.

Learn More About People Making a Difference in Northern Michigan