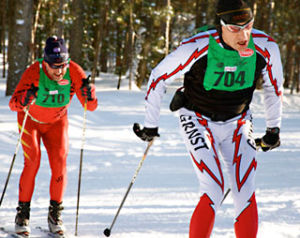 Dedicated to the celebration of cross-country ski culture, this weekend’s Vasa Festival of Races, set near Traverse City, will feature timed races of various distances and styles where people can put their Nordic ski skills to the test and enjoy Northern Michigan’s great outdoors.

Work bee volunteers have been busy grooming the Heikki Lunta race trail for the 2012 Vasa Festival of Races, host to the AXCS (American Cross-Country Skiers) National Masters Championships and the 36th Annual North American Vasa. Based on the Swedish Vasalopet, an 85-kilometer race attracting 12,000 skiers each year, the North American Vasa invites skiers of all ages to test their skills while enjoying the breath-taking beauty of the Vasa Pathway located just north of Traverse City.

The weekend kicks off with the Vasa pasta dinner on Friday, February 10th at Timber Ridge Resort in Traverse City from 5:00 – 8:00 pm. All racers are invited to this group carbo-load in preparation for Saturday and Sunday’s races. Fresh pasta, a choice of sauces, bread, salad and beverages will be served  “all-you-can-eat” style as a benefit for local youth ski programs. Meal prices are $8 for adults and $4 for children. It will easily be the best deal in town!

Serious skiers will take over the Vasa Pathway in Northern Michigan’s beautiful Pere Marquette State Forest on Saturday, February 11th, as individuals compete in the 36th Annual North American Vasa. Skiers can sign up for 12k, 27k, and 50k freestyle and classic races, set along challenging loop courses that will capture the rich heritage of traditional cross-country skiing. There will also be two special classic skiing races, part of the Michigan Cup series and the AXCS National Masters Championship- the biggest championship cross-country ski race on the continent.

The Gran Travers Classic, offered by the Traverse City-based Hagerty Insurance, will take  place on Sunday and feature both 6k and 16k distance races for classic technique. The Gran Travers is only mildly competitive and is  an ideal event for a recreational skier to challenge himself or herself to try a fun race for the first time. Both loops avoid the bigger hills of the Vasa course, but feature classic set-tracks custom groomed just for this event. Men and women who ski the race can qualify for both Michigan Cup and National Masters’ points.

Don’t forget the kids! The North American Vasa encourages any and all to experience the fun of cross-country skiing, and as such is introducing the 2012 Great Lakes Youth Ski Festival as part of the Vasa Festival of Races. Kids can sign up for freestyle skiing on Saturday and/or classic skiing on Sunday, and will be entered into a race time based on their age. All youth races will take place at Timber Ridge in Traverse City, where racers can look forward to award ceremonies, hot soup and snacks, and a whole lot of cross country comaraderie!

It’s true it’s not the whitest winter… but the show will go on! As with all ski races, Vasa has had to adapt to Northern Michigan’s ever-changing snow conditions; and while snow is minimal and temps are predicted to hit the high and low 30’s during the week leading up to the race, Vasa officials assure racers that the primary loops are 99% snow covered and ski-ready. Volunteers have been skiing the course daily to insure the trail will be carefully groomed and double-tracked to provide kick-and-gliders the best opportunity to test their cross-country ski skills during 2012’s Vasa Festival of Races.

Maintained by dedicated volunteers and supported by public donations, the Vasa Pathway is operated by the Traverse Area Recreation and Transportation (TART) Trails, a non-profit organization dedicated to developing and preserving non-motorized trails in the Grand Traverse region.

Click here for more information, including ski times and how you can sign up for the races!