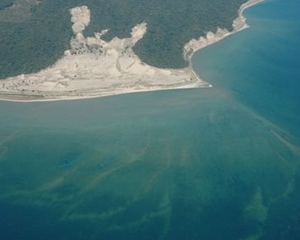 Our tradition is my son and I go out to North Manitou Island with my friend and his two sons. We started when my son was probably 8 and my friend’s oldest son was 6. So, two little dudes at that point. We put backpacks on them, but didn’t put much in them, just their clothes, and we didn’t travel far. But they felt like they were backpackers, and they really enjoyed the wilderness.

The thing we like about North Manitou is it is big enough to feel like wilderness, but small enough that, if you go back year after year, you really get to know the place. You kind of own it. It becomes part of you.

We usually go south out of the village, staying on the east side of the island, and walk for as long as the smallest one can handle. Then we turn into the woods away from the beach and just camp there. So we go a little farther each year as Casey, my friend’s younger son, gets a little bigger.

What we do there, well, really, it’s all about the beach for those guys. Just hanging out on the beach, enjoying Lake Michigan and the beautiful beaches you have there. But we also do trips, like to the west side of the island or to check out the cemetery, look into old busted buildings, walk in the abandoned orchards.

A moment that really sums it up: We were hiking the beach one year and there was a sort of tidal pool up on shore a bit. And it was teeming with black tadpoles, just black with them. The boys sat in the water and the tadpoles surrounded them, nibbled on their arms. Thousands of tadpoles running over their bodies. They were so delighted with that. It’ll always be a powerful, special experience to remember.