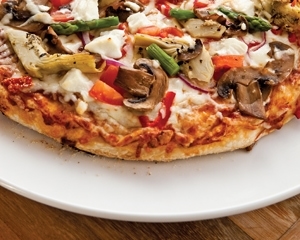 These local pizzerias, conveniently located in towns around Northern Michigan’s ski resorts, may be the reason you plan your next day of snow-filled fun. Read on as we explore the apres-ski pizza scene.

Lake Street Market
Stepping away from the frozen moonscapes of Lake Charlevoix in January and into Boyne City’s Lake Street Market, you’ve left winter for a warm and delicious universe of great food. Gourmet pizzas built on crispy Asiago and basil-laced crusts slide in and out of the oven, their commingled vapors of applewood bacon, roasted garlic and olive bruschetta insinuated in every corner of the store. Proprietors Liz Glass and Chris Meyer chat with their cast of regulars and curate the well-stocked coolers of international cheeses, cured meats and olives as well as a complimentary selection of wines and craft beers. The eccentric nomenclature is as delicious as the food itself, with a signature pastrami sandwich named “Dangermouse” and an edible ode to pork on pizza simply called “Pigs.” With personal service and eccentric charm, Meyer and Glass ensure that everyone enters Lake Street Market hungry and leaves devoted. 306 South Lake Street, Boyne City 231.582.4450

Papa Lou’s
Tuck into the Big Kahuna or feed your inner mob boss with the Good Fellas pizza: pancetta, capicola, roasted red peppers and onions. Papa Lou’s has a dangerously creative array of martinis as well as tasty suds by the pitcher. 317 East Lake Street, Petoskey 231.348.3663

Vivio’s
End an afternoon of swishing through Pigeon River Country in the vintage glow of Vivio’s. Try the self-describing Meat Amour and wash it down with a bottle of Chianti. 4531 South Straits Highway, Indian River 231.238.9471

The Liz Glass and Chris Meyer story began at a bustling restaurant in Hilton Head, when two food industry veterans discovered the chance to realize a mutual dream and so moved back to Northern Michigan, bought an old general store in Boyne City and starting kicking out some of the most delicious pizzas and sandwiches the North has ever seen. We corner Liz and Chris to talk curious nomenclature and pizza magic.

Before I bite into “Mr. Wubbly’s Fat Bass,” I need to know how it got its name.
Liz’s dad is responsible for that one. We have to do it this way; sometimes the names come from fragments of conversation in the shop, sometimes they are found after a fevered bout of wine tasting. We write everything down.

You two get creative with the toppings. Any current favorites?
It’s all about roasted garlic right now. We’re obviously big fans of DIY but there are lots of great roasted garlic purees for sale.

Take and bake technique for Lake Street Market pizzas—give it to us.
425-degree oven, pizza stone if you have one, cookie sheet if you don’t. Bake for 13 to 15 minutes and carefully watch the color of the crust. You want it to be crispy and a deep golden brown.