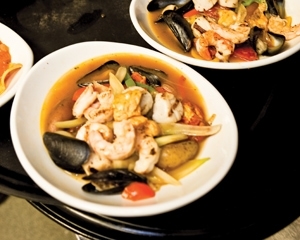 Northern Michigan Restaurants: Bistros serve up food fixed with care and worthy drinks options all around. Here we show off four from Traverse City to Petoskey that represent.

It’s January, hunkering season in Northern Michigan, and rather than mourn the warmer months it’s time to indulge your appetite, get your bon vivance on and make a beeline for one of our great local bistros. Intimate space, elevated comfort food and restorative libations make these dynamic dining destinations perfect for January weekends with friends and lovers. The core spirit of bistro dining is eccentric and democratic with friendly relaxed service and menus rooted in classic technique but wired to the aesthetic of the resident chef. The gestalt makes room for everything from duck rillette to designer burgers. Join us as we troll through a quatrain of hotspots on the Northern Michigan bistro circuit and explore the mood, food and liquid love that will have you dialing for the next available reservation.

L’Ambience: On a cobbled vector off bustling Eighth Street at the southern rim of downtown Traverse City, diners at Chez Peres can sip Pernod and stare through big fogged windows at the passing winter traffic. Inside you’ll find closely nested two-tops populated by lovers sipping Côtes-du-Rhône, the cooing of a long-dead chanteuse slipping between the clatter of silverware and the irregular hissing of an espresso machine. Chez Peres is neo-Parisian in its very soul. The servers, polite but not meddling, hustle more than hover while elaborating the plats du jour and gesturing at the requisite chalkboard. Between bites of dauphinoise there is the inescapable feeling that you can live like a belle époque expatriate a few miles from West Bay. Perfect for pre-theater or date night. Wear your best black turtleneck.

Les Vins: In true bistro tradition the wine list at Chez Peres is concise and affordable, with most bottles priced below $50 and values to be found in the $20 range. The rustic versatility of Grenache-based wines from Côtes du Rhône and Minervois are balanced by more modern offerings from Northern Spain as well as a few local bottlings.

L’Ambience: A casually swank island of urbanity tucked among the lakes of eastern Antrim County, Lulu’s could easily be a satellite of the current Chicago food scene with its exposed brick, slick artsy fixtures, hammered ceiling and perennial buzz. A destination dining spot from all compass points, Lulu’s boasts an eclectic clientele of resorters, northern hipsters and indigenous foodies; its stylish environs and raucous acoustics make this a great spot to people-watch or dine with friends.

Les Vins: Curated by general manager Mindy Bisson the list at Lulu’s is predominately domestic and with well-priced choices for both the brand conscious and boutique drinker. You can order a ripe and spicy zinfandel to drink with your pork shank or dial it back and sip on a solid bottle of chardonnay from the Macon, both for less than 40 bucks. Lulu’s bar also shakes up some sick martinis so don’t feel like you have to behave.

L’Ambience: A bistro-brasserie hybrid with a sexy zinc bar, legit euro vibe and full frontal exposure to the shimmering North Arm of Lake Charlevoix, Cafe Santé is where everyone wants to be. Magnum Hospitality’s pièce de résistance in mood and menu Santé could have been airlifted out of Paris’s fourth arondissment. The interior is appropriately dark with a mix of intimate booths, tables and high-top bar seating set with bistro paper and rolls of vintagey silverware. Service is quick and attentive.

Les Vins: The liquid landscape at Cafe Santé is one of the best in the North with dozens of hip proprietary cocktails, a staggering selection of imported beers and an exclusively European wine list flush with bons vins from Alsace to the Adriatic coast. Supposing someone else is driving you can start with a champagne cocktail like the Pernod Fizz, sail through a bottle of Bourgogne aligoté with your starters, wash down the mussels with a flight of Belgian draughts and sign off with a shot of absinthe. Santé indeed.

Feeling the bistro glow and disinclined to take to Northern Michigan's snowy roads? We’ve paired each venue with a nearby accommodation, so your bistro foray can be a walkable weekend outing.

The Grand Victorian
402 North Bridge Street, Bellaire, 877.438.6111 Stately and plush, a room at the Grand Victorian will give you an enticing breakfast and a little country swagger for your night out at Lulu’s, just blocks away.

Waterstreet Inn
240 Front Street, Boyne City, 231.582.3000 These one-bedroom waterfront condos on Lake Charlevoix, not far from Cafe Santé, have fine amenities and can be had for a steal on off-season weekends.

Stafford’s Perry Hotel
100 Lewis Street, Petoskey, 231.347.4000
Sip a fireside Manhattan in the lobby bar at this classy Victorian resort hotel before or after your snow globe romp to Chandler’s and through Petoskey’s Gaslight District.