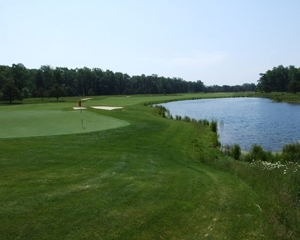 Northern Michigan Golf: Forest Dunes Golf Club in Roscommon, Northern Michigan, has often been pegged as under-utilized despite its reputation as one of the most critically acclaimed golf clubs in the United States. This may soon change, as a new owner launches a new future for the club, aimed at making Forest Dunes a national golfing destination.

For the last ten years, Northern Michigan's 1,300 acre club and its 7,141-yard course, designed by Tom Weiskopf, has been collecting coveted awards as one of the nation's best golf courses. Yet there has been little growth to show for its lofty billing. The future now lays open for the golf club, after its recent purchase by Lew Thompson, a  trucking company magnate from Huntsville, Arkansas.

Thompson's experience is not limited to the trucking industry, however. He is the managing member of a partnership that owns and operates The Bridges Golf and Country Club with a Jack Nicklaus course in Montrose, on Colorado’s Western Slope.

With a stellar, standing reputation, it is no surprise Thompson chose Northern Michigan's Forest Dunes for his next business opportunity. The golf course is located in an environmentally sensitive area near the Au Sable River, one of the nation’s finest fly fishing venues. Forest Dunes’ effort to protect the river earned it the highest level of certification a golf course can receive- a coveted Gold Signature Certification from the Audoban International organization. There are only 21 other golf properties in the world with that gold certification and Forest Dunes is the only course in Michigan to achieve the distinction.

The golf course is set within the 40,000-acre Huron National Forest where course designer Weiskopf found rolling, white inland sand dunes and extensive tracts of sand that he incorporated into memorable golf holes. Complementing the golf course is a huge practice facility that features a two-and-a-half acre putting course. A former British Open champion who has earned an international reputation for world-class course designs, Weiskopf has described Forest Dunes as one of his three best efforts.

Acknowledging Forest Dunes’ reputation as one of the best conditioned public courses, Thompson said that Jim Bluck, the superintendent of grounds and Donny Fisher, the Head Golf Professional are remaining on staff.

Thompson has wasted no time implenting an energetic plan that may bring growth to the renowned golf club and to Northern Michigan. He hopes to make Forest Dunes Golf Club more hospitable and attractive to daily golfers, its current members, as well as potential members who might buy property there.

An architect has already designed a 22-room hotel with four luxury suites, and building plans will be submitted in January to township and county authorities for approval. The building will be attached to the 23,000-square-foot clubhouse, a spectacular facility designed to invoke the style of a great Adirondack lodge. “A lot of our members live out of state, so when they come in they will have a nicer place to stay than a hotel room,” Thompson said. “From the research I’ve done, a lot of our golfers play there on their way north or on their way south to play somewhere else because we had no place to house them. We decided to build the hotel so they now will have a place to stay.”

Such encouragement could benefit not only Forest Dunes Golf Club, but Roscommon and surrounding Northern Michigan towns, as well.

The golf club's new building site has been staked off and covered with straw to mitigate the ground freezing. This will give construction crews a fast start when the winter breaks in Northern Michigan. Thompson said he is planning to have the facility open by the end of June or early July.

Stay in touch with life Up North with MyNorthcom.
X
X