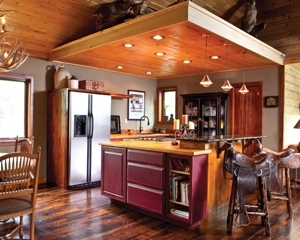 Ultimate Up North Kitchen Tour: Meet Doug Hill. Consummate entertainer. Flamboyant cook. Resourceful. Creative. Spontaneous. So spontaneous indeed, that when Doug (day job: an importer of digital door locks based in Mount Pleasant) realized a boathouse he was building on his otherwise vacant property on Lake Charlevoix was going to have “a whole lot of room,” he went for it and turned it into a full-out Northern Michigan cottage that he baptized Hillys Broken Prop Lodge. An avid outdoorsman, Doug ran with a rustic theme, building a conventional stick frame structure first, then embellishing it with timbers and plenty of western red cedar and knotty pine trim work.

Given his penchant for food and parties, it was obvious that the kitchen and bar were going to be central stage—so he turned to his sister, kitchen designer Bonnie Hill, for a little help. The brother and sister duo worked together to design the open kitchen that features an island generous enough to house a gas cooktop—and still allow room for guests to gather and watch Doug cook signature dishes such as his famous Bang Bang Shrimp (see recipe on page 27). “He likes people standing around watching him flip the shrimp,” Bonnie says with a laugh. Doug fabricated the island countertop from pine sealed drum tight with plenty of high quality polyurethane. Knowing that the man-kitchen would need a bit of warmth to it, sister Bonnie ordered distressed barn-red cabinets for the base.

Like a lot of things in Doug’s life, the pine floor was an excuse for a party—the difference being that unlike the usual good times at his house, this was a distressing party. Doug invited a bunch of close friends and instructed them to bring whatever they’d like to use to hurdle at his floor. In they trooped with chains, meat cleavers and what have you’s. He served beverages and they let loose. What sounds like mayhem was actually a calculated way to get the nicks and grooves Doug wanted on the floor he later stained black and then sanded to look as though it had been worn down by a century of boot heels.

Now that the work is done, the weekend parties have begun—the boathouse turned cottage has already been the venue for a lobster boil in the summer and winter weekends were filled with snowshoeing and chili eating. Doug cooks the chili on a big old woodstove—the cottage’s only heat source—that he inherited from his parents. He also makes soups, stews and bread on the woodstove. Wouldn’t you know?

Click for the recipe for Doug Hill's Bang Bang Shrimp