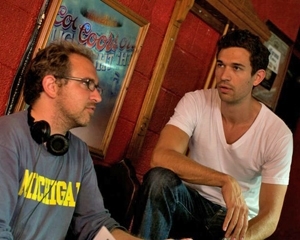 Traverse City Events: When Michigan natives and brothers Chris Farah and Mike Farah set out to make their first feature film, they knew the perfect location in which to set the project: their hometown of Ann Arbor. Chris, an alumnus of the University of Michigan, hoped to showcase the city and college that defined his childhood and early twenties. The finished product, a comedic drama that follows a university student struggling to find his path in life who enters into a citywide pub trivia tournament with a ragtag group of teammates, far exceeded the filmmakers' expectations: Not only did the film land such notable cast members as Chris Parnell (Saturday Night Live), Christopher Gorham (Covert Affairs), Arielle Kebbel (Vampire Diaries) and beloved University of Michigan professor Ralph Williams, the film became the first production to ever receive permission to use U of M's logo and name on screen and to shoot at the Big House during a live football game. Last month, Wrekin Hill Entertainment – the company behind such hit films as Memento, Donnie Darko and Whale Rider – announced it had acquired the film for national distribution.

This Sunday, the Farah brothers will visit Traverse City as part of a limited Michigan theatrical release tour to premiere Answer This! at the State Theatre. In a recent phone interview with MyNorth, the filmmakers discussed the inspiration behind their feature film debut, the process of shooting in Ann Arbor and at the University of Michigan, and the humorous – and surprisingly competitive – world of pub trivia.

MyNorth: This is the first feature film for both of you. What were your professional backgrounds leading up to this project?

Chris Farah: Compared to a lot of people, I had a pretty long and winding road to get here. I’ve been in Hollywood for about five years. Before that, I was a journalist in New York for three years, where I freelanced for places like The New York Times and Salon.com. and was an editor at Foreign Affairs. But I was looking to do something more creative. Thankfully, my brother had been out in Hollywood already for about five years himself, so I let him do the heavy lifting of getting established. I moved out there and started working on some feature scripts, which didn’t go anywhere, but then Mike and I worked on some Web videos together that got us noticed. He went on to work for Funny or Die, and I started thinking about a script idea that would be more personal and rooted in our real life and past – something that would be more for us, and less for Hollywood. That’s where the idea for this movie came from.

Mike Farah: After I graduated from college, I saved money and moved to L.A. without really knowing anyone. Slowly but surely, I began making connections and did what people do in any industry to work their way up: took on unpaid internships and whatever jobs I could to pay the rent. My big break was getting a job at UTA (United Talent Agency), where I worked for an agent who represented a lot of writers and directors. From there, I met a director named Craig Brewer (Hustle & Flow) and ended up working for him and his producing partner. I was eventually promoted to Head of Development there. They had a first-look deal with Paramount, so I worked there for two to three years, until the first-look deal ended with the writers’ strike in 2007. It was a blessing in disguise, though, because Chris and I and other people we knew began making Internet videos, since you couldn’t work anywhere else at that time. Funny or Die featured some of those videos, and that’s how I became the first producer for that website and eventually transitioned into President of Production.

MyNorth: Answer This! has been described as a “love letter to Ann Arbor.” There have been dozens of films shot in Ann Arbor the past few years, but yours is unique in that it was the first production to ever receive permission to use the University of Michigan’s logo and name in the film, and to shoot at the Big House during a live game. How were you able to get the university on board, and why was it so important that U of M be featured in the film?

Chris Farah: I don’t think we ever could have or would have done the film anywhere other than in Ann Arbor and at the University of Michigan. I wrote it thinking that it’d be economical to film there, because we have friends and family there. But I had only vaguely heard of the film tax incentives. When I found out how generous it was, I literally remember thinking: “This must be a mistake.” It really made a difference. I also thought because I’d gone to U of M, that I’d just take the film to the university and get it made. And that’s what happened—we met some great people there who embraced the script and took the movie under their wing—but we really only learned after the fact how amazing it was that that even happened.

MyNorth: What inspired the plotline of pub trivia?

Chris Farah: That actually came from when I lived in New York. I didn’t even know pub trivia existed, and my cousin invited me to go with him one night. As it turns out, I’m really, really bad at trivia. But thankfully, my cousin is a genius and a juggernaut at it. We went into this place that had a lot of regulars, who would spar back and forth with each other week after week and who knew each other’s specialties and weaknesses. So here come my cousin and I, total outsiders, and we proceed to win the first three weeks in a row. It was such a strange crowd, and I loved how seriously everybody took this absurd game. The only thing you won was a bottle of cheap wine, and yet everyone was incredibly serious about it. (laughs) I thought to myself, “This would be an amazing set-up for a movie.”

MyNorth: Your premiere this Sunday in Traverse City at the State Theatre is part of a limited release tour in Michigan for the film. What has the reaction been like from audiences so far?

Chris Farah: We’ve been extremely blessed. Crafting a movie is a very long process. We had a lot of screenings of rough cuts that were not exactly easy to sit through. (laughs) It takes a while to hone your story and get things right, even after the film’s been shot. But at this point, I really feel good about the movie and audiences’ reactions to it, to the point where I enjoy every screening. We’ve been at film festivals in Michigan, like the Waterfront in Saugatuck, and we’ve also been at the Newport Film Festival in L.A. We did a special screening for distributors in LA., and we’ve done sneak previews at the Michigan Theater in Ann Arbor. What’s been great is seeing all of these different audiences react to it and watching people from very diverse backgrounds enjoying the film. It’s one thing to get a great home crowd reaction, which we did in Ann Arbor, but to show it people in L.A. who've never even been to the Midwest before and get them to love the film – that’s the ultimate test. I’m proud that we passed it.

MyNorth: After the tour for this film is done, what’s coming up next for both of you?

Chris Farah: Right now, I’m sitting on the couch at my mother’s house, where I’ve been sleeping the last several weeks and will continue to sleep for another month until this Midwest rollout is done. (laughs) But after this, we’d like to make more films, and we’d like to make them in Michigan if possible. I have some ideas for romantic comedies and a few other films that I look forward to getting started once this project is complete.

Mike Farah: We’ve also still got quite a few things going at Funny or Die that keep me busy, including some projects with Chris.

Chris Farah: Yes. We’ve actually got a new video coming out this week that I directed starring the fantastic Kenny Loggins, who did Danger Zone and Footloose and all those other classic soundtracks. It’s great that I can do something like this film, and then these short Funny or Die videos every now and then. It keeps things interesting.

The Traverse City premiere of Answer This! will take place on Sunday, October 16 at 5:00 p.m. at the State Theatre. Filmmakers Chris Farah and Mike Farah will appear in person at the screening and host an audience Q&A after the film. Post-film, there will be a filmmakers' after-party at Dillingers on Union Street (approximately 7:30 p.m.) featuring drink specials, free food and a special trivia contest hosted by Team Trivia of Michigan. For tickets to the screening, visit statetheatretc.org. (Note: University of Michigan alumni receive $2 off admission). For more information about Answer This!, visit answerthismovie.com.