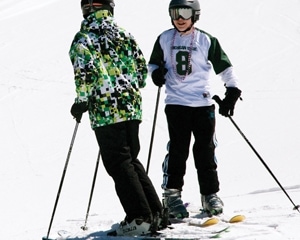 The best time to buy a season pass: last spring. The next best time: right now. The season pass world can be a crazy complex maze of possibilities that goes way beyond our space to present. So here’s a snapshot: the unlimited season pass adult price plus a deal we like at each resort. Check the respective resort websites for a look at all the options. Upshot: skiing and riding is less expensive than you think.

Crystal Mountain: The Crystal Premier Pass (adult unlimited) $369. The Pick-A-Day Pass: choose the day of the week (Saturdays excluded) you want to ski all season, $159. crystalmountain.com

Treetops Resort: Buy at least three season passes (anybody in group, not just family) and pay $122 for each. Price increases October 16. Student pass: achieve a GPA in first marking period of 3.0–3.5 and get a season pass for $75. GPA of 3.5 or better pays just $35. (The kicker: if you’ve already bought a season pass at $122, you score a rebate if you get the grades.) treetops.com

What’s the most exciting change on the ski and snowboard scene this year?

Olympic organizers just allowed slope style snowboarding as a medaled game. They’ve had half-pipe and super-pipe, but this is a first for the boxes, rails and jumps. It will be the first time those athletes will be tested on the world stage for their creativity and athleticism. And that genre can be applied just as well on our 500-foot hills as it can on a 2,000-foot mountain. The Olympics will certainly give that area of the hill more energy and focus.

We were the first to put one in and won a lot of awards for it, but the super-pipe can be a challenging thing for a resort. It’s such a difficult thing to do, the technique and athleticism required … very few people can do that, and we found it just was not being utilized. I also want to say more power to Otsego Club for their super-pipe [which has attracted Olympic competitors from around the globe]. I hope that works for them and I think that’s great.

Every business talks about getting a piece of the baby boomer market—how is that working out for ski resorts?

We continue to see the baby boomers show up with their children and their children’s children in tow. Baby boomers continue to participate in outdoor activity like skiing and snowboarding. Maybe they are focused on a use it or lose it way of living. More of them are staying in shape, staying active. And advances in ski equipment in last few years, especially the shaped ski revolution and now the rocker design, allow people to not embarrass themselves on the race course and have a blast on groomed snow.

Boot: Better fits than ever make sure all the force you apply through your foot is applied to the ski when and where you want it. Boot devotees are watching Fischer’s new Vacuum boot, which are custom-fitted to your foot using air pressure and a moldable liner—perfect fit is the goal. Best instant improvement you can retrofit to any boot: a custom-shaped (molded to your foot) sole insert—all racers have them. Pictured: Fischer Vacuum.

Board: Rocker design began with snowboards and continues to dominate design. Riders have come to love the way rocker lets them get into and out of turns easier and quicker. Designers are now tweaking the rocker for specific snow conditions and skill levels. Word is rocker is like power steering in a car. Beyond that, expect tougher finish surfaces so your board stays shiny and unchipped and materials that make boards ever-lighter and more responsive. Pictured: Atomic Banger.

Ski: The rocker design (aka reverse camber) is finding wide application as ski makers roll it out through entire lines. Paired with shaped-ski designs, the rocker is making skiing more fun, more doable, more right-now for more people. Think instant gracefulness, especially for all those baby boomers who are returning (or dreaming of returning) to the slopes after a long hiatus (you know who you are). Pictured: Volkl RTM 84 or RTM 80.

Watch a slideshow of hot new ski and snowboard jackets for the 2012 ski season!

Fabric technology allows for dyes that are more colorful and more permanent, so naturally designers are happy to run with it. On the hill and in the ski haus this season, look for bright greens, blues and oranges in bold sections of color—solids, squares, trapezoids, and the occasional swirling graphic. A key difference is rather than designs being screened onto a base, many can be woven from the fabric itself. Also, waterproof/breathable fabric is becoming stretchier, allowing women’s lines in particular to move toward a more form-fitting, Euro cut. The evolution is most notable in snowboard wear, which for women has long been influenced by the boxier men’s cuts.

The Function: What you want and why.

Winter temps in Northern Michigan are relatively warm, very often around the freezing/melting point, which means two things for the jacket and pant department: Melting snow gets you wet from outside and sweat gets you wet inside. The lesson is get the best quality waterproof-breathable fabric you can afford. GoreTex remains the gold standard, but good, less expensive alternatives exist, like Patagonia H2No, Helly Hansen HellyTech XP, and Mountain Hardwear Conduit. For full waterproofing, all seams (not just the most exposed ones) should be taped or thermo-welded and zippers should be covered by fabric. Quality hill attire has powder gaiters at wrists, waist and ankles to keep snow out. You want to freely move your arms: get radial-cut shoulders for unrestricted arm movement. Layering is always the best outdoor dressing approach: look for removable liners—some jackets have two, mesh and insulated. Pockets: the more the merrier.

Find everything you need for the 2012 ski season on the MyNorth Ski Page.