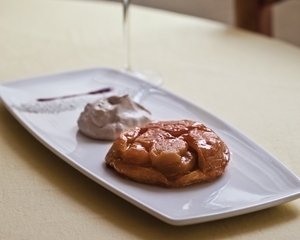 Northern Michigan Restaurants: From salad to strudel, we discover the elegant ways restaurants from Traverse City to Petoskey are serving apples:

Bordered by late-blooming perennials and a little iron gate, La Bécasse pipes the aroma of savory boeuf bourguignon into the autumn air already heavy with the sweetness of woodsmoke and ripe apples. Opened in 2005 by Parisian-born Chef Guillaume Hazaël-Massieux, this cozy gastronome’s hideout is nested near the south shore of Glen Lake. A paradox of crisp linen and burnished wood, La Bécasse’s décor melds rusticity and refinement, and its kitchen serves up the same: quintessential French country fare like duck and pistachio pâté, legit cassoulet with duck leg confit and Toulouse sausage. We like the seasonally sublime Tarte Tatin, a classic French dish of apple caramelized in butter and sugar and topped with flaky pastry dough and garnished with crème fraîche. Guillaume is a meticulous steward of his wine cellar which holds 1,500 bottles ranging from simple vins des pays to grand cru Burgundies and rare bottlings from the Rhône Valley and Calvados, an oak-barrel-aged apple brandy. Join us as we follow the apple cart into some of the North’s best kitchens where fall’s finest fruit is rendered in four delicious phases.

T.T.: French technique is the basis for most Western cooking, what’s the core philosophy?

GHM: At its base French cuisine is simple food that‘s well organized. Escoffier laid out the techniques, which require you to work meticulously with good ingredients. From there you can make the food as rustic or as fancy as you want.

T.T.: There are rumors that you’re working on a new project in Traverse City at the Grand Traverse Commons …

GHM: It’s true. The concept will be a classic French bistro with 70 seats, a big lounge for small plates and drinks and a 50- to 70-seat terrace. We’re calling it Fou Fou; it means ‘crazy’ and is also a West Indies nickname for the hummingbird. We’re hoping to open in early spring of 2012.

T.T: Apart from tarts, what do you like to do with fall apples?

GHM: I love to make a breakfast hash with fresh apple, potato and cabbage. Blanche shredded potatoes, mix them with shredded apples, cabbage and onion, season with salt and pepper and crisp in butter and olive oil.

Grilled Quail The New York 101 State Street, Harbor Springs 231.526.1904 The succulence and natural sweetness of quail is complemented by a creamy risotto of caramelized onions and red apples accented with the salty sharpness of Parmigiano.