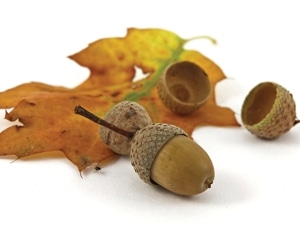 Northern Michigan Oak Trees: Last year, my friend complained that acorns were raining down on her car in the driveway of her Traverse City home, hundreds of acorns, leaving dents in the car roof and hood, microscopic cracks in the paint. She had thousands more acorns rolling across her sidewalk, deck and lawn. She stepped on them; they rolled like ball bearings. They were dangerous. They were everywhere. This year, she has hardly any acorns. Next year, who knows how big the crop will be, but odds are acorns will be scant again. At some point in the next few years, maybe even five years from now, in no set cycle, acorns will again rain upon her car and yard in Northern Michigan.

It’s strange enough to see this seemingly random phenomenon in one person’s yard, but the far stranger and far more puzzling thing is that in the same season that my friend’s oak pumped out a gazillion acorns so did every oak of that variety for hundreds or perhaps even thousands of miles around. And, likewise, when my friend’s tree had practically no acorns, the same was true of all other similar oaks. No set cycle, but somehow, all the oaks “agree” (using term very loosely here) that in a given year they’ll fill the world with acorns. Other years, not. All in.

Scientists have examined the phenomenon many times, but one of the most vivid studies happened in California, where Walter Koenig and Johannes Knops analyzed blue oaks and found evidence of this synchrony extending among trees that ranged over 20,000 square kilometers and included every one of between 100 million and 200 million trees.

Other species exhibit synchrony of fruit production too, but oaks are among the most obvious and have long been watched because for centuries pig farmers have cherished acorns as pig feed, a “finishing” food that imparts excellent flavor just prior to autumn butchering. The phenomenon is called masting, a term that comes from the word mast, which refers to acorns and other tree fruit used as animal feed.

Scientists have long speculated on the two wonders of the masting phenomenon. Why do trees produce a great abundance of fruit one year and then go years with thin production, on no real predictable cycle? And how do trees located hundreds of miles apart all synchronize their fruit production?

As to the why, one leading theory holds that trees—we’ll stick with oaks here—follow this pattern as an evolutionary tactic that outwits animals and insects that eat acorns. By having several years of very low acorn production, only a small community of predators can survive on the available food. Then, when the flood of acorns happens, the bounty far surpasses the ability of the predator base to consume the vast production, hence many more acorns are able to survive to sprout. The energy required to produce so much fruit can be tracked in growth rings: years of great production show thin rings, meaning little tree growth; years of sparse acorn production show thicker rings.

The mystery of the “how”—how trees synchronize their fruit production across thousands of square miles—has vexed scientists for a long time. Is the mechanism a chemical somehow transported root to root through the soil? Some plants do communicate this way, but the method could not explain how isolated pockets of oaks are synchronized with the broad oak community. Same with wind dispersed clues—pollen doesn’t travel far enough to reach trees isolated several miles distant. One obvious possibility is amount of rainfall—one might expect abundant acorns in wet years and lean crops in dry years, but acorn production doesn’t track closely with rainfall.

More recent research has focused on something called the Moran Effect, named after the Australian statistician, Patrick Moran, who first theorized it. The Moran Effect suggests that clues from the climate could trigger a synchronized response across a broad region. This is slightly different than theorizing, “there’s a lot of rain and sun, so trees use those abundant resources to make a lot of acorns.” It’s more like there is a set of climatic clues that exist in a given season, and once the right clues are present, the trees flip into acorn production high gear. Scientists have looked closely at climate patterns to see if climate effects are consistent enough over broad regions to trigger a synchronized response, and so far they believe climate offers at least a plausible explanation. So, as they say, research is ongoing. And in the meantime, when acorns start plunking you on the head, you can know they are falling on your friends’ heads hundreds of miles away too.