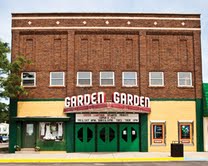 Northern Michigan Events: Catch the 2011 Frankfort Film Festival in the newly renovated Garden Theater in this Lake Michigan port city. Five short films by students from the Interlochen Motion Picture Arts program will precede five of the feature films to be shown.

An unorthodox Irish policeman with a confrontational personality is teamed up with an uptight FBI agent to investigate an international drug-smuggling ring. Starring Brendan Gleeson, Don Cheadle and Mark Strong.

A 45-minute documentary spotlighting the Traverse City West Senior High School Marching Band. An inside look at what it takes to be part of the band & what it’s really like to be part of the group that works harder & laughs more than you’d ever dream possible.

Kaja is an eternal optimist in spite of living with a man who would rather go hunting and isn't interested in having sex with her anymore because she "isn't particularly attractive." But when "the perfect couple" moves in next door, Kaja struggles to keep her emotions in check. Not only do these successful, beautiful, exciting people sing in a choir, they have also adopted a child – from Ethiopia! These new neighbors open a whole new world to Kaja, with consequences for everyone involved.

The moving and surprising stories of three Violence Interrupters who try to protect their Chicago communities from the violence they once employed. Shot over the course of a year, The Interrupters captures a period in Chicago when it became a national symbol for violence in our cities. During that period, the city was besieged by high-profile incidents, most notably the brutal beating of Derrion Albert, a Chicago High School student, whose death was caught on videotape.

The Illusionist (L'illusionniste) A French illusionist finds himself out of work and travels to Scotland, where he meets a young woman. Their ensuing adventure changes both their lives forever. Starring Jean-Claude Donda, Eilidh Rankin and Duncan MacNeil.

(two for one) Steven's quiet night in his local pub is interrupted when Rachel arrives looking for her blind date. Blind Date is an 11-minute portrait of modern British dating.

The story of twenty-two year old Elliot Carson on the day before he has surgery to remove a brain tumor. Facing what could be his last night, Elliot’s path intersects with Chloe Webb, a young photographer who invites him to her art show. As the night descends, Chloe takes him on an exhilarating journey through the city. But as morning approaches, the magic of the evening unravels, and they must together face the uncertainty of Elliot’s future. Starring Parker Croft and Emilia Zoryan.

5 P.M. Where Soldiers Come From

A snowy small town in Northern Michigan to the mountains of Afghanistan and back, Where Soldiers Come From follows the four-year journey of childhood friends, forever changed by a faraway war.

While obtaining souls in the afterlife, a misfit death collector seeks to win his life back. Starring Luke Bonczyk and Ben Kellar. Original music by Hanna Rae Beale.

After losing his parents at a young age, overweight Terri was sent to live with his uncle. As his uncle's health begins to deteriorate, Terri becomes the target of relentless teasing by classmates. His intimidating vice principal, Mr. Fitzgerald, recognizes a student in need, and reaches out to him. Through that unlikely friendship, Terri discovers outcasts needn't endure life alone, and by banding together, they can accomplish great things. Starring Jacob Wysocki Creed Bratton and John C. Reilly.

Unprecedented access to the New York Times newsroom yields a complex view of the transformation of a media landscape fraught with both peril and opportunity. Page One gives us an up-close look at the vibrant cross-cubicle debates and collaborations, tenacious jockeying for on-record quotes, and skillful page-one pitching that brings the most venerable newspaper in America to fruition each and every day. Starring David Carr, Tim Arango and Carl Bernstein.

Of Gods and Men (Des Hommes et Des Dieux) In 1996 in the Algerian Mountains, caught between a military government and extremist guerrillas, a group of monks face the decision of their lives. Starring Lambert Wilson, Michael Lonsdale and Olivier Rabourdin.

New York For decades, this Schwinn-riding cultural anthropologist has been obsessively and inventively chronicling fashion trends and high society charity soirées for the Times Style section in his columns “On the Street” and “Evening Hours.” Bill Cunningham New York is a delicate, funny an often poignant portrait of a dedicated artist whose only wealth is his own humanity and unassuming grace. Starring Bill Cunningham, Anna Wintour and Michael Kors.

Lovely, repressed and quietly intelligent, French chambermaid Hélène discovers her love for chess when, one day, she comes upon a couple engaged in an intense match. This obsession with the game, much to the chagrin of her husband and teenaged daughter, leads her to seek the clandestine tutelage of a reclusive American doctor – a liaison that radically transforms both of their lackluster lives. Starring Sandrine Bonnaire, Kevin Kline and Valérie Lagrange.

Passes for the four-day film festival are $50 per person, and individual film showings are $10 per person. Tickets for the Film Festival may be purchased online: frankfortgardentheater.com/filmfestival.html.