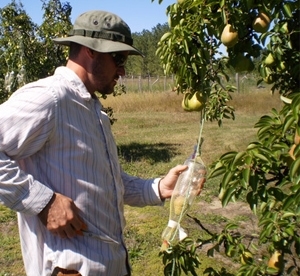 Northern Michigan Wine & Brandy: Coryn Briggs of Black Star Farms tells us how the winery puts the pear in their  pear brandy:

We make this product (Pear and its Spirit – 80 proof Pear Brandy) every year as long as we have quality pears grown in the bottle as well as in the rest of the orchard – as these are the ones that make the eau de vie brandy that fills the bottles.  This year there are approximately 900 bottles hanging in the orchard!

In Spring, a bottle is tied over a budding branch in the pear orchard with hopes that a Bartlett pear will grow to maturity inside the bottle. The pear is harvested, cleaned and washed, and the bottle is then filled with pear brandy from the same orchard and hand labeled in this special limited presentation.

What happens to the pear? Over time it becomes calcified, and is not consumed. As the bottle is emptied but while the pear is still covered with brandy, we recommend refilling it with a bottle of Spirit of Pear eau de vie brandy.  The pears in the photos were harvested yesterday and the day before at Delight of Life Farm in Suttons Bay.

More information about our distillery:

This region is justly known for fruit cultivation fostered by glacially carved lakes and hills and a climate tempered by Lake Michigan.  Our small specialty distillery operation began in 1999 on our farm in Suttons Bay. In 2007 we moved the still to our Old Mission facility and we began production of brandies again in 2008.

Our fruit-based brandies capture the essence of Northern Michigan fruit and they are generally known as eau de vie style spirits.   Eau de vie (fruit brandy) is French for "water of life". The spirits are clear and represent the pure essence of fermented fruit. The balance of fruit and alcohol reflects both the artisan skill of the distiller and the quality of the fruit. We produce brandies from local cherries, apricots, pears, plums, raspberries and grapes.  We also produce a barrel-aged apple brandy that is aged for three to five years, using both French and American oak. At the precise time the distiller feels is optimum to showcase the “spirit” of the fruit, the brandy is bottled – often a single barrel at a time, or in very small lots.