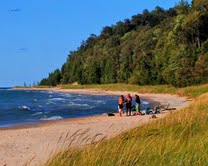 The first thing which struck me when flying over Traverse City was the vast expanse of green stretched out beneath me. In every direction the same deep hue acted as a backdrop to tiny houses of white and the ruby red of Dutch barns, juxtaposed against the glass-like surface of the lakes. The second thing was the peaceful, friendly quality of the place; something which was shattered when we met our other English friends at the airport who greeted us with an inappropriate, but frankly hilarious welcome sign. Having finally reached our destination after 22 hours of traveling, our quest to throw ourselves into American culture led us to Art’s Tavern in Glen Arbor. Inside was everything we had hoped for, a wonderfully noisy atmosphere with an array of American dishes which sounded bizarre (pig cakes? muffins with white gravy—a Southern dish we were told?) to us but tasted delicious.

The next day we embarked on ‘The Agenda’; a strict timetable of events which we insisted had to be followed with military-style precision if we were to experience everything this part of the world had to offer. This meant that even as a hopelessly clumsy, less-than-fit individual, I started the day canoeing in Lake Michigan. The experience was wonderful in the gentle heat, particularly in the crystal clear waters which I had stared at longingly from our balcony that morning for the first time. Sadly the same could not be said of my two male traveling companions, who after capsizing five times caused an amused American audience to wonder how Britain ever got a reputation as a great sea-faring nation. This query intensified as we tried paddle boarding which as a completely new experience led to a few false starts, but turned out to be a lot of fun. It soon became clear that it was not just us who adored spending time on the lakes, but that they are important to everyone in this region. Upon a visit to our friends the Fellows’ family in Leelanau we looked on in envy at their life on the lake, and even had the opportunity to try tubing with their boat. Despite a few injuries and cries of ‘For Churchill! For the Queen!’ from the more patriotic English members of our party, as someone who rarely goes on boats I found it an exhilarating experience. Even more unforgettable was watching the glorious sunset whilst curled up at the front of the vessel, feeling as if we were flying over the water.

One particular characteristic of this area is the air of quiet calmness that pervades everything, from the scenery to the friendliness of everyone you meet. Several people in my group commented on how relaxing and refreshing their experiences have been; it feels as though there are no expectations other than the freedom to enjoy whatever aspect of the area you wish. This meant that we made occasional diversions from ‘The Agenda’ to take pleasure in whatever we came across. Our particular favorite was the daily visit to Cherry Republic in Glen Arbor, appreciated even more after completing the grueling 450ft Sleeping Bear Dune Climb one day where again some of our group entertained an audience by climbing the wrong way and using sticks for poles. We adored sampling the unique shops in Glen Arbor, especially watching an artist paint to music and walking through the fragrant lavender garden of Bay Lavender Trading Co. The same delight was to be found upon visiting Leland, where away from the delicious contents of River and Main sweet shop the two youngest of our group were bombarded with American teenagers asking them to pronounce words in their British accents, something we’ve all had to perform whilst staying here. The unusual shops of Traverse City were equally exciting; vintage clothes and custom-made ice cream parlors were a welcome change from the uniform high street stores found in every town back home. Our resident food lovers also enjoyed visiting Bowers Harbor Vineyard, where the exceptionally welcoming Tom gave us a tour of the vines through the dappled sunlight of a summer’s evening.

When reflecting on my time spent in Northern Michigan, I can honestly say that it has been an experience like no other. Since this idyll is relatively unknown in Britain, for a group of English tourists it has felt like an escape from the bustle of our lives to a more relaxed and natural way of living, as well as an insight into all aspects of America which I found highly interesting. Although it has only been a few short days for us I can guarantee that when back in England I will sorely miss the weather, saying hello to strangers and having maple syrup on bacon for breakfast.

Serena Sidaway is a high school student in Worcester, England and writes for MyNorth.com.