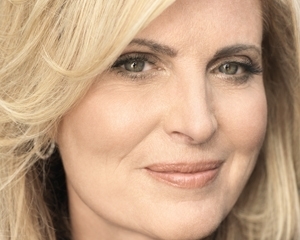 Mackinac Island: In this first of a two-part interview during the campaign for the 2012 Republican presidential nomination, Ann Romney, wife of Governor Mitt Romney, talks about the couple's ties to Michigan—and Northern Michigan—in a casual one-to-one conversation at the Grand Hotel on Mackinac Island during the Republican Leadership Conference here.

You have some pretty strong Michigan ties—including Northern Michigan. We’d love to hear.

I grew up in Michigan and my family had a summer cottage in Manistee on Lake Michigan. These are my stomping grounds. I just love Northern Michigan—every summer it was Manistee. I had two brothers, so I was a tomboy and we’d spend all our time swimming in Lake Michigan—and you know the water was cold and I didn’t even know it was cold. But I also loved exploring the woods. I’d catch frogs, the really giant ones, and my mom would make frog legs for us.

The other thing I did—I was such a tomboy—I would catch blue racers and wrap them around my neck and wrap them around my wrist and just walk around with snakes all over me. And I’m not a snake person. I don’t know how I did that! I just loved the woods and exploring and just being a kid in Northern Michigan.  It feels like home when I come up here. It’s of one of my favorite places in the world. And coming to the Mackinac conference it’s like, Oh yeah, we get to go to Northern Michigan!

I remember before I ever met Mitt looking at pictures of George Romney (Mitt’s father who was Governor of Michigan 1963-69)  walking across the Mackinac Bridge (on the annual Labor Day Bridge walk) he was so determined … he was a powerhouse. I just had that mental image of him even before I met Mitt or Governor Romney senior.

So obviously Mitt had his own Mackinac Island memories since he got to stay in the Governor’s Mansion. And the rumor around the conference is that you two had a summer romance up here.

[Laughs] When Mitt and I started dating in high school—it would have been that summer that I was 16 and Mitt was 18—his greatest pickup line of all time was: How would you like to go up to Mackinac Island and stay in the Governor’s Mansion.  So I went—it was probably a 3- or 4-day weekend. And I fell in love up here on Mackinac Island. So obviously this place has very special memories.

I remember how sunny the windows were in my bedroom in the mansion—and that view—it’s probably one of the most beautiful views in the world. To look out over all that water. It was like the movie Somewhere in Time. It was a good pickup line and it worked. [Laughs].

It’s rumored that you had your first kiss under the Mackinac Bridge?

I don’t know if it was our first kiss! He’d brought up his 15-foot boat and we explored around the island and went under the bridge. We just goofed around as kids. We were pretty stupid kids too, I can’t believe we did what we did. When you think about it there’s these huge freighters going by. I don’t think his father even knew what we were up to—they just let kids pretty much go out and do whatever they wanted to back then.

Fast forward to the 2011 GOP debates—he seems to be holding his own against the other frontrunner, Texas Governor Rick Perry.

I am very, very proud of him in the debates because you know, I think beyond him being extremely intelligent, he is also very polite. I know he’s giving back as well as he’s taking, but he’s also very respectful.

What could Michigan expect under a Romney administration?

Four years ago, when we came back to the state to campaign, Michigan was already really in trouble. Everything was shutting down. It just broke our hearts. Driving through Detroit now is just shocking. Mitt and I grew up in Michigan’s heyday. His father was governor during its heyday. And it just seems like Michigan doesn’t need to be this way now. It’s got to get restored to where it was.  I’m looking forward to him being being president and helping Michigan get manufacturing jobs back here and making it easier for businesses to be established. It would be very important to us to see Michigan revitalized.

With Mitt and I growing up on the Great Lakes and loving them as much as we do … it would be critically important to us to preserve the beauty. Michigan is so unique. At breakfast this morning—I was shocked. We were at the Holiday Inn Express [in the Upper Peninsula], and we went down and there was a big public breakfast, and of course everyone was coming up and talking to Mitt, and they were from all over the country, and I was like, What are you guys doing here? Like how did you find it? Who knew about the U.P. when I was a kid?  Nobody even went to the U.P. There’s some good promotion of the state going on!

Stay tuned to MyNorth.com for Part II of this interview at Mackinac Island's Grand Hotel where Ann Romney speaks about her struggles with MS, breast cancer and her deep friendship with Elizabeth Edwards, wife of democratic presidential candidate John Edwards who died last year after a long and public struggle with breast cancer and a bitter divorce.