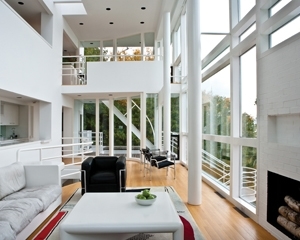 We (i.e., the staff of Traverse Magazine, Northern Home & Cottage and MyNorth.com) love dwell magazine. Read it cover to cover, fight over first rights to it when it arrives in the office. So we were delighted to see, how to say it politely: we scooped dwell twice in one issue.

The cover story of dwell’s October 2011 issue is the Douglas House, designed in the 1970s by starchitect Richard Meier (Getty Center in L.A. and many more buildings). The house is tucked away in the woods around Harbor Springs, which puts it smack in Northern Home & Cottage territory. In late 2009 the home’s current owners Mike McCarthy and Marcia Myers (love your dwell cover photo Mike and Marcia!) let us into the Douglas House to do a story. “An Icon Revealed,” ran in our December 2009 issue of Northern Home & Cottage. The two stories, October 2011 dwell and December 2009 Northern Home & Cottage complement each other beautifully. Modern architecture aficionados will want to read them both.

Keep turning the pages in your October dwell and you’ll come to the Archive Department and an article on Alden Dow. Again, another nice complement to our August 2011 Northern Home & Cottage interview (about Alden Dow) with Dow protege and former partner Richard Gilmore.