Meaningful Memories from the Drive Up North 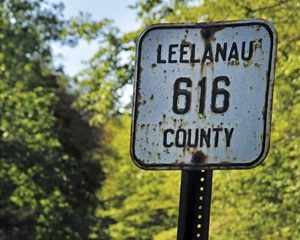 I’m talking not just about taking my time, but about going even further, about reversing the unspoken assumption that the best route for going anywhere is also the fastest.

I’ve done it a few times now, folding and refolding the map on the seat beside me, or sometimes not looking at it at all, but just trusting that if I follow roads north and west I’ll get there.

By there, I mean the shores of Lake Michigan near the Sleeping Bear Dunes, which has been my destination at least three or four times a year for the past 20 years, from a starting point somewhere in the suburban sprawl of Metro Detroit.

I’ve done the back roads in January, turning and contorting my route to avoid incidental contact with an interstate or expressway, corkscrewing through small towns where snow is piled against the aluminum siding and smoke drifts from chimneys. I’ve done the trip in August, too, when tall yellow grasses and the clanking of counterweights on empty school flagpoles echo of summer a lot more artfully than Sunday night rush hour on southbound I-75.

Of course, with these two-lane trips, I’m talking not just about taking my time, but about going even further, about reversing the unspoken assumption that the best route for going anywhere is also the fastest.

Recently I followed M-66 for a good portion of the ride, through towns like Stanton, McBride, Edmore, and Barryton. In between the towns I saw farms and empty roads and a spray-painted sign at the foot of a driveway declaring availability for work. That doesn’t exactly compete with Grand Traverse Bay, but it does fine matched against the orange barrels, brake lights, and back fenders of the freeway. The towns themselves can seem like little metropolises after you’ve traveled a stretch of bare pavement, and then a burg that could serve as a flyover-state punch line to someone in California becomes your own special discovery. You can stop to buy a candy bar and fill up the tank. To find the best restaurant you can ask the person at the register where, within 20 or 30 miles, they would go for a graduation dinner. (Graduation can be replaced with prom, wedding rehearsal, or anniversary as appropriate. This is an acquired skill.) You can modify the approach to learn where to walk the dog, let the kids romp, or stay the night—though I’d leave prom out of it when asking for a motel.

You can tailor your meandering to suit your mood. I once spent an afternoon at a festival in downtown Sparta, where the main attractions for the day were carnival rides and an arm-wrestling contest. I stayed away from the carnival rides, but the arm-wrestling was another story. I didn’t compete (I’ve been retired since losing a cage-match to Steve Dillon in the eighth grade), but I stuck around long enough to watch the youth competition, which was won by a mullet-haired teenager flush with confidence and success at age 17 or 18. He wore a shirt with the sleeves cut off and smoked cigarettes in between matches and looked sort of familiar.

Needless to say, this kind of thing isn’t in the tour books for a reason, but that’s part of the attraction: the curious, the odd, the memorable occur more when given a chance to happen. I’d stopped driving to jog along a dirt road years ago when a gust of hot wind plucked a farmer’s cap off his head and dropped it at my feet. That I lengthened my stride, caught up to and had a conversation with the farmer, who was riding a tractor along the shoulder, seemed unremarkable at the time—but in the two decades since has become a memory of youth, of summer, of feeling the future stretched out as far as the sunset and the sky. I don’t remember where I was going when I stopped for a run on that particular trip; I just know I wasn’t on a schedule to get there.

So now, looking for a way out of the drop-ceiling confines of my office, I click over to Google Maps, and find this: M-57 cutting west through Ashley, Carson City, and Greenville; then M-37 going up into the Manistee National Forest, where we find Harrietta, pop. 169; Boon, pop. 670; and, over on the northwestern edge, Brethren, pop. 929, which a few more mouse-clicks reveal as the one-time home of actor James Earl Jones (Darth Vader) and the place where, with encouragement from a local teacher, he began to overcome a stuttering problem.

But I do understand the flipside to all this. You probably have only three or four days at your destination. You don’t want one or two of them frittered away on back roads and tiny towns. I’m no different. In so many years of traveling that familiar southeast-northwest circuit, I’ve seldom managed it. When I have, though, a certain magic has occurred: access to that simple but dazzling paradox, the strange inverted truth that if only you’d stop trying to make time, you’d have more of it.