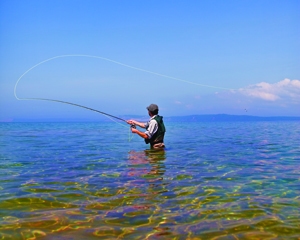 Kelly Neuman spends 200 days a year analyzing why, when and where big game fish move into the shallows of the Great Lakes waters—and how to catch them once they arrive. Good thing for the rest of us (who can only dream of such a life), he’s willing to share the fishing wisdom gained.

Clear, shallow water, a light wind and the fierce quality of late summer light have conspired to turn everything here on  Lake Michigan’s Platte Bay in the Sleeping Bear Dunes National Lakeshore, liquid metal: the gunwales on Kelly Neuman’s flat-bottomed fishing boat, the brushed aluminum of a furiously spinning fly reel, the spectral fibers and holographic eyes of six-inch streamer flies bristling in an open fly box, and the flashing silver flanks of an 18-pound female king salmon as she finally slips into the net.

This Lake Michigan bay in Sleeping Bear Dunes National Lakeshore smells vaguely of algae and fish and is sun-baked with the earliest, subtlest premonitions of autumn. Green is losing its grip on the surrounding hillsides. The only sounds are small swells lapping under the boat and rhythmically washing up on the beach, the sharp swish of fly lines zipping through guides and the occasional splash of a salmon pounding the surface of the bay. We are here well before the heart of the salmon run, hoping to intercept silvery kings staged off the river mouth and still actively feeding before instinct pushes them upstream to spawn and die. This is not the stereotypical Zen-like choreography of tiny flies and wispy tippets most often associated with fly fishing. This is elegant aggression.

Affable, with an easy smile and the chronic optimism of a career fisherman, Kelly Neuman loads us into his 14-foot center console jet boat that is perfectly tailored to the pursuit of in-shore anadromous [fish that live in the big water but spawn in streams] trophies. As we chug through a crystal clear stretch of the lower Platte River that winds through the Sleeping Bear Dunes National Lakeshore en route to the bay, Neuman scans deep pockets and bankside lies.

“Three nights ago there were waves of Coho coming through here,” he says, noting that the uncharacteristic heat spell has pushed many of the fish back into Platte Bay. Once clear of the river mouth our guide steers us into a 12-foot-deep trough about 100 yards off shore. We begin casting with the wind and swimming the flies back toward the boat with erratic twitches to mimic fleeing baitfish.

While I fumble with the heavy sinking-tip line, Neuman launches his chartreuse Glow Pig and 95 feet of line into the blue- green seam where the Platte River current runs parallel to the shoreline. He allows the fly a few seconds to sink and then begins furiously stripping it back toward the boat. The relative silence is interrupted by an explosive swirl followed by a tail smack. The line goes tight, the rods bends double and a fresh, powerful and angry king salmon is peeling line off the reel. “Fish on!” Neuman shouts as the tightly set drag whines, and the salmon charges toward deeper water.

A former software engineer now living in the Lake Huron harbor town of Tawas City, within easy striking distance of miles of rocky Great Lakes shoreline, Kelly Neuman has given his life wholly over to fly fishing and could easily be considered the pre-eminent authority on fly fishing the Great Lakes shoreline. His expertise has been earned through years spent on the water learning the fickle habits of his quarry and developing his own wisdom of nearshore hydrodynamics. Spending more than 200 days on the water, Neuman knows where the fish will be and why: a compound understanding of water temperature, seasonal migratory patterns and forage.

Looking out at the unbroken blue of Lake Michigan I notice striations of color close to shore. Where the dynamics of waves have created deep troughs, clear, shallow sand flats drop into green depths cut through with bright blue. Kelly Neuman sees zones of opportunity. “The key to understanding these fish is understanding their food,” Neuman tells me. “Offshore winds will push cold water along with schools of shiners and alewives closer to shore, and the predators will follow them. During the spring and late fall there’s plenty of food in shallow, and the water is consistently cold enough to keep the browns and lakers hanging around.”

This wisdom is a coup for the fly fisherman who has traditionally left the pursuit of “big water fish” to charter boats and their mechanized approach of downrigger and trolling with heavy tackle. By adapting the basic methodology of in-shore saltwater fly fishing popular along the Eastern Seaboard, Kelly Neuman and others like him have negated the perceived need for $40K deepwater trolling boats and complex electronics, giving fly anglers on foot or in kayaks the chance to hook up with huge brown trout, lake trout, salmon and steelhead for the light tackle fight of a lifetime.

On certain mornings in July and August, following a hard east wind that has blown the warm surface water away from Michigan’s western shore, baitfish will concentrate in the shallow waters near troughs and drop-offs, and silver kings and Cohos will be there to eat them. These fish, pure silver when actively feeding, bear little resemblance to the greenish-gold kype-jawed monsters that will ascend the rivers to spawn and die in a few short weeks. When hooked, these shimmering missiles will make an angry jettison of up to a hundred yards, often cartwheeling above the water as they go. As these fish are highly sensitive to changing water temperatures, they may only hang around for a few hours before returning to their habitual 100-foot depths, but intercepting one at this vulnerable, precise moment is a thrill that will leave your shoulder throbbing for two days.

Fly fishing the Great Lakes shoreline affords a unique solitude and sense of perspective. Tuned to the contours of the lake, the play of light and wind and season, we can happily lose hours casting into the horizon. To the attentive angler, a flock of screaming gulls crashing the waves on a rocky stretch of places like Little Traverse Bay is the visible cue of an underwater frenzy where the madcap scatter of little silver baitfish is intersected by the snapping jaws of big trout and salmon up to 20 pounds. Though plagued by dire news of invading Asian carp, cormorants, threats of water diversion and itinerant oil spills, our Great Lakes remain a vibrant eco-system at the center of our identity here in Northern Michigan. Fly fishing the Great Lakes shoreline affords us an intimate connectivity to the living waters around us and the uncommon thrill of battling big fish close to shore.

For Kelly Neuman this type of fishing is an adrenaline rush turned way of life but not, as he is quick to point out, a game of instant gratification. “Some days we’ll cast for hours into the cold wind without even a follow,” Neuman says. “But every day on the water, fish or no fish, teaches me something. We’ve earned every fish that comes to the net.” Though sometimes frustrating, the shifting nuances of trophy trout and salmon and the waters they live in keep us coming back to sweat and freeze and curse until that heart-stopping moment of simultaneity when the fly line goes tight and we are tethered to something bigger than ourselves.