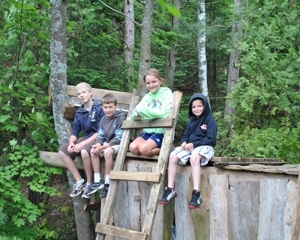 Northern Michigan Living: Building a fort shouldn’t seem like a nostalgic nod to simpler times gone by, yet in this age of technology takeover, it may appear to be. Perhaps that’s what makes the story of Kevin 11, Ryan 14, Maddie 12, and Josh 10, so meaningful. The industrious group enjoys every minute of their time spent in the Northern Michigan woods, just being kids.

To say that they are examples of kids doing what they are supposed to be doing—playing outside, getting dirty and having fun—is not to say that they take their work lightly or that it’s all just fun and games. The elaborate fort compound that they have been planning and constructing since 2007 (due to liability concerns from the town, they had to rebuild this year) is nothing short of brilliant.

The kids built their original fort in the forest, behind the development in which the neighbors and close friends all live, with a Lake Michigan view to be envied. Using only materials, which they have found, not bought (mostly boards, which they believe to have floated over from an old shipping dock or Lake Michigan shipwrecks), the kids use kayaks to collect the wood from the water. With the exception of the brand new hinge used on the door, the structure was built entirely without cost.

Aside from being cost effective, their work ethic in creating their masterpiece is outstanding and rigorous—often leading them to set alarms to rise at 6:30 a.m., hop in their golf carts loaded with tools and supplies and begin building. This determination is what allowed them to overcome the legal setback this spring, which forced them to tear down the original fort they had worked so hard to construct, when the Parks and Recreation board of the Grand Traverse Community decided that the fort could be a liability in that it was on public land and ordered them to abandon it.

Despite the hundreds of hours they had spent on the fort, the kids tore it down salvaging the boards and supplies and moved on to another site, building a bigger and better version on private lands. The new fort now sits just a few meters from the old one, where a memorial now stands.

The kids have grand plans for the expansion of their new lakeside lodge and plan to continue working on it all summer long. The new fort will boast a rooftop deck from which there is a view of the lake, a new and improved foyer and several new rooms. When they’re not busy building, the crew transforms the fort into a store, selling various goods from the window such as muffins, beach glass and Petoskey stones to passers by. One member of the community was very appreciative of their hard work after she sought refuge from a sudden storm in the fort, while walking along the beach.

Today the fort stands strong on a foundation of friendship, youthful spirit and a sense of community—a testament to the importance of childhood. And judging by the sturdiness of its façade, it will long stand as a reminder for its builders and perhaps to our Up North community, to always take the time to simply go out and play.

MyNorth.com wants to make it a bit easier to raise healthy kids and share Northern Michigan with the young people in your life. With an easy idea-a-week, Kids Up North will get you and your kids diving into Michigan’s spectacular outdoor recreation, provide hand-picked events and help you get your kids outside and active. Each week you’ll find everything from nature hikes to fishing holes, from music outings to pick-your-own farms. Every week we add new ideas to the list below so check back for more fun with your kids!

Subscribe to the Kids Up North e-newsletter and get these weekly ideas delivered to your Inbox!