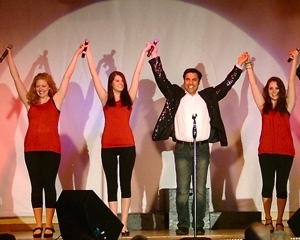 The Williamsburg Showcase Dinner Theater staff is thrilled to announce the three new shows lined up for the summer. "Country Cool" runs on Thursday nights and features music by Johnny Cash, Kenny Rogers and Shania Twain. On Friday nights the cast performs "Yesterday Once More," which is a mix of movie and TV show themes, dance songs and popular hits from years gone by. Finally, Saturday night presents "Rock ‘N’ Roll Heaven," where the focus is on the late greats of the rock industry, such as John Lennon, Ray Charles, Janis Joplin and Buddy Holly.

Shows are open now and run through August 27th. Located just off M-72, the Williamsburg Showcase Dinner Theater provides natives and tourists alike with great food, service and of course, song and dance for only $39.95 a ticket ($30 for children under 12!). Visit their website to see all of the dates and the menu offered at the Dinner Theater.

Dominic Fortuna, the show’s producer and one of the area’s greatest musical resources, can’t help but be excited about the summer of performances. “We have a great product going at The Williamsburg, with wonderful talent, delicious food and a professional and fun atmosphere. We have a great, local cast and it really is a fun night!”

Originally from Detroit, Fortuna spent his summers up near Torch Lake as a young boy, and in 1976 the Fortuna family made the move permanent and opened Mico’s restaurant. There, Fortuna began singing and performing and had his first professional gig at age 14. His resume of jobs and contacts is impressive; he has been a part of the Young Americans, was voted “Best Northern Michigan Entertainer” by Northern Express Magazine People’s Choice Awards in 2002 and 2003 and has worked alongside greats such as Dean Martin, Peggy Lee, Barry Manilow and more. Recently, Fortuna played Vince Fontaine on the Midwest Tour of Grease with the American Musical Theatre.

“I loved working on Broadway,” he says. “I am now good friends with some amazing and talented people through that experience like Jim Jacobs, the writer/creator of Grease, and Taylor Hicks, the season five American Idol winner. It was gratifying and humbling at the same time to actually see my name in lights!”

Not only does the Dinner Theater boast Fortuna’s talent, but it also offers a place to showcase young Up North singers and musicians. Ranging from high schoolers to college grads, young people from Traverse City, Elk Rapids, and Interlochen have found employment at the Dinner Theater to be fun and exciting.

“It’s the best summer job I could ask for,” claims Craig Manning of Traverse City. “Being a part of the Dinner Theater is a great experience for someone like me who wants to spend their life performing.” Manning is studying vocal performance at Western Michigan University, and has worked at the Dinner Theater for the past two years. Fortuna mirrors Manning’s sentiments. “I love working with the casts—molding them and letting each cast member shine in their own way,” he says. “It’s all a challenge and it’s all so rewarding.”

In 2004, Fortuna paired with Dan Kelly of Catering by Kelly’s with a dream in mind. “I have a ton of dinner theater background,” Fortuna says, “and the combination has really been great with Dan’s food. The best part of dinner theater is getting to know the audience and being right there, singing to and with them.” This summer, the Dinner Theater is better than ever, featuring three never-before-seen shows and a whole bunch of new local talent. Call 231-938-2181 to make your reservation today.

And for more information about Dominic Fortuna, check out www.dominicentertainment.com.