An Infinity Pool by Lake Michigan 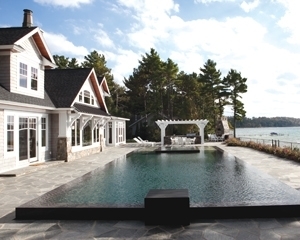 From September through May, the Rolstons’ life feels a world away from their Lake Michigan summer home in Traverse City. That’s when Dad, Brian, is the star left wing for the New Jersey Devils hockey team. And it’s when Mom, Jennifer, is left with most of the parenting of the couple’s three sons, Ryder, 9, Brody, 7, and Stone, 6, while Brian focuses on the grueling game schedule. At season’s end, however, the family loads up the car and drives to Northern Michigan. “We really need the time together—the downtime, the time to regroup,” Jennifer says.

Brian was raised in Michigan and attended Lake Superior State College in Sault Ste. Marie, so vacationing in Northern Michigan was a natural, and by 1996 he’d purchased property on Lake Michigan’s East Bay in Traverse City, where he built a summer home. The first time he brought Jennifer to visit—fresh from New York City where she was living and working—she fell in love with the area. A wedding and three kids later, it was time to renovate the house that Brian had built (“It was a bachelor pad—you know, with no closets,” Jennifer says with a laugh).

As a part of the spectacular Craftsmanesque renovation (courtesy of Petoskey’s Glennwood Custom Builders and designer Jill Rowley), the couple decided to build a pool: “We always had the idea of a pool in the back of our minds,” Jennifer explains. “I grew up with pools. We wanted the kids to swim, but when we got up here in May the lake was cold and it seemed like it was just warming up when we left in August.”

It turned out to be no ordinary pool. The pool that the Rolstons asked Bob Drost, of Drost Landscaping in Petoskey, to build for them is a 52-by-22-foot four-sided infinity (sometimes called negative edge) pool that presents a Zen-like waterscape, a liquid transition from the home’s terrace to the Lake Michigan shoreline. “There is just a beautiful marriage between the house, the outdoor patio, the pool and the shoreline,” says Drost—who also cites how exacting the pool’s engineering had to be to ensure that the water poured evenly over all four sides. “If we were off so much as a ½  an inch we’d have a bare spot on the sides where the water didn’t flow over,” he explains.

The terrace is Cowboy Coffee quartzite and the raised pool edge is black porcelain tile. Like the pool, the perimeter-edge overflow spa is lined with porcelain tile and lit with an LED light system that offers a palette of light choices. A shallow-water sun shelf wraps around three sides of the spa—perfect for adults to lounge in low beach chairs or, in the Rolstons’ case, for small boys and dogs to splash off excess energy.

Suffice it to say, that everything from the hydraulics (700 gallons of water a minute cycle over the perimeter-edge) to the smart system that allows the Rolstons to begin heating the in-pool spa from their car, even before they reach Traverse City, is perfect. When the Devils’ season ended in June, the Rolstons packed up the family car and drove to Traverse City from New Jersey to see the completed renovation for the first time. “It was just breathtaking—we couldn’t believe it,” Jennifer says. “That feeling carried through the whole summer.”