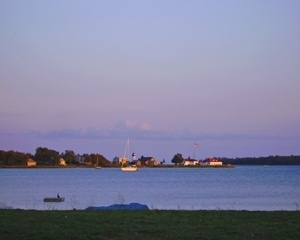 We’re big on sailing, so one thing we like to do is sail up to Beaver Island for a weekend. It’s a fun place to bike, has really nice beaches and, I dunno, there’s just something about it, we just like the atmosphere. The people are neat on Beaver Island; we really enjoy their island spirit, that certain independence and self-reliance that island people have.

More often than not we anchor offshore there. Then we’ll go on shore and at some point we always go to the Shamrock. It’s the local watering hole with a pool table, the gathering place for the whole community. You have families, old timers from the island, boaters and people from the ferry.

We even celebrated our 50th anniversary on Beaver Island. We rented the Rectory—an inn and restaurant—and had our family stay there. It’s right by the beach.—Martha and Larry Garber