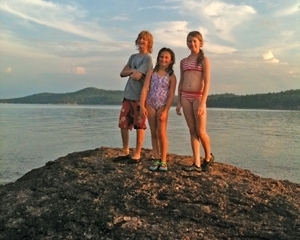 What we do is head up to Marquette in Michigan’s Upper Peninsula and stay at Harlow Lake cabins—they’re run by the DNR. There’s five cabins, and we like cabin No. 5. It overlooks Harlow Lake and has a cool rock outcropping you can sit on right there. It’s rustic, so there’s an outhouse, and you pump water; also, bring a lantern. We have a 12-year-old son and a 9-year-old daughter, and last year we took our 13-year-old niece.

Our tradition is to leave early and stop in Marquette at the co-op to stock up on food. Harlow Lake area feels wild, but you are just 10 or 15 minutes from town. You have to hike maybe a quarter mile into the cabin, so we load up a bike trailer—we always take our mountain bikes—and haul stuff in that way. Then we get on our bikes and ride over to Presque Isle State Park, very close.

There’s an island near shore that you can just wade to, and it’s a wonderful little island. Rocks you can jump into Lake Superior from, a little scrambly single-track that you can circumnavigate the island on. The beach is fantastic. And if it’s too windy on one side of the island, you just go to the other side where it’s protected and calm. So we do that the whole rest of the first day.

Each day I like to get up and run a trail along the Lake Superior shore—it’s cove after cove of secluded beaches. Then, on the second day we go rock climbing on the back side of Marquette Mountain. Downwind Sports in Marquette can give you all the information you need on that. They also have guides with gear. It’s great climbing for all ages. Also Downwind and other bike shops have great mountain bike trial info. Oh yeah, another hike we like to do is up Sugar Loaf Mountain. It’s pretty short with a great view of the bay and city.

On the last day we just get up and go into Marquette for brunch at the Sweetwater Cafe—nice fresh ingredients. Then we drive home.—Copland Rudolph