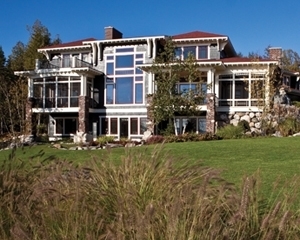 Though the couple winters near San Diego, they are native Michiganders. “I had vacationed on Higgins Lake as a kid, but we discovered the Charlevoix/Petoskey area in the late 90’s when it was really coming to life,” Todd says. “We loved the fine dining, art galleries, and the boating lifestyle.”

The Ansons first bought a lot on Lake Charlevoix’s narrows with plans to build there, but when 511 feet of secluded frontage, part of the storied Loeb estate, became available, the family changed their plans and built their dreamy Sierras-meets-Michigan getaway.

Settled into its site on a private cove amid 500 tons of boulders, the house seems to have emerged from the ground—perfectly situated to take in the water view from every window. Each room (except one lavatory) does indeed overlook the lake, but achieving it wasn’t quite so effortless. Credit architectural designer Jill Rowley of Glennwood Custom Builders for masterminding the perfect angles. “That’s my pride in this house,” Rowley says of the view-centric layout.

The Ansons were so impressed with Rowley’s work that they later brought her to California to remodel their minimalist contemporary home—a challenge to any designer’s stylistic versatility. “The breadth of her talents knows no bounds,” says Todd, who claims a “near-reverential devotion” to Rowley’s work.

Fueled by a trip to the 1927 Ahwahnee, and to the new but similarly styled Lodge at Torrey Pines in La Jolla, California, Rowley brought the Ansons’ vision to life. Natural-finished American black walnut flooring and casings are milled from sapwood for a wide range of color variation. Rowley selected Native American motifs from the Ahwahnee and worked them into a custom-designed rug and trim detailing hand-painted by artist Kris Gerling of Boyne City. Even the coffered ceiling in the master bedroom is defined with hand-painted borders.

Outdoor living space was important, so Rowley designed several porches including a screened porch that nestles against a stream designed by Petoskey landscaper Bob Drost. The water meanders around a massive fireplacea chimney constructed from interlocking boulders and quirky, misshapen clinker bricks. The over-fired bricks were considered manufacturing cast-offs until the Arts & Crafts Movement in the early 20th century when architects began prizing them for their earthy, irregular shape and color. Todd trailed the source of the bricks from the Lodge at Torrey Pines to a brickyard in Missouri where a cache of clinker bricks had sat dormant for nearly 100 years. Now they’re a distinctive element tying his house to the Californian lodge architecture that inspired it.

For this cross-country couple, it might be hard to decide which is sweeter: summer Up North or winter in Southern California? “We jealously protect our time Up North. It’s ruined our international travel during July and August,” says Todd. But on those summer evenings when the Ansons relax on their porch with the lake view and the trickling stream, they tend to forget about the rest of the world, given they have it all right here in Charlevoix.