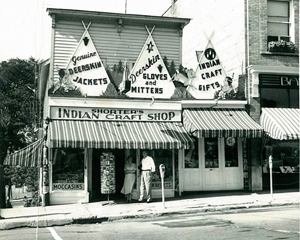 On Memorial Day Weekend just after World War II ended, nearly 65 years ago, Carl and Ruth Shorter opened a tiny Northern Michigan souvenir shop in Petoskey—Grandpa Shorter’s. Through the years, the couple and their family expanded the original storefront as each generation tweaked and improved this beloved Northern Michigan icon—a store that won first place as “Best Souvenir Store” in the Traverse Magazine and MyNorth.com 2011 Red Hot Best of Northern Michigan contest.

According to the current and third-generation proprietor, Jennifer Shorter, the store credits its success to “hard work and great customers who keep coming back."

Now, 65 Memorial Days later, the Shorter family is celebrating the store’s birthday with celebrations throughout the year.  To kick off the year’s festivities, Grandpa Shorter’s is hosting a birthday party for itself on June 3, during Petoskey’s Downtown Spring Open House. Atop the requisite cake and ice cream that can be found at any birthday party, visitors can savor the famous, gooey chocolate sauce originally cooked up by Esta Cooper, Ruth Shorter’s mother, over four generations ago. Party favors at this once-in-a-lifetime event include the secret recipe for the sauce as well as entering in a drawing for a $500 gift basket jam-packed with Michigan goodies.

On Saturday, June 11, Grandpa Shorter’s second event of the season kicks off—a fundraiser for scholarships to Camp Daggett, a Northern Michigan summer camp in Pellston. Back in the day, Carl Shorter paid for kids to go to the summer camp when their families couldn’t afford it. To continue the tradition, the store is devoting 20 percent of its sales that day to the C.G. and Ruth Shorter Scholarship Fund, which now tallies just over $10,000.

“My grandfather was raised in Pellston and we wanted to give something back to that community,” Shorter said.

With such a strong and supportive following, it’s likely that Grandpa Shorter’s will continue its presence in the Petoskey community for another 65 years.