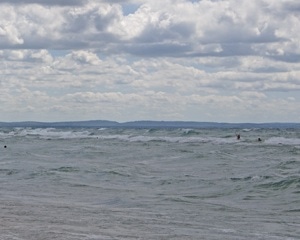 Beautiful Northern Michigan beaches provide countless residents and Northern Michigan visitors with enjoyment and entertainment during the summer months, however, beach-goers should take caution when venturing out into the water, for rip currents pose a very real threat to swimmers in the Great Lakes region. Because of this threat, the National Oceanic and Atmospheric Association and partners, the United States Lifesaving Association and the National Park Service are teaming up to alert those who plan on swimming in Northern Michigan lakes, of the dangers associated with rip currents by instituting National Rip Current Awareness Week, which will take place from June 5-11.

Did you know that Rip currents claim more than 100 lives per year Nationally? Or that each year, more than 50,000 swimmers must be rescued from rip currents? Rip currents are surprisingly strong and can occur with strong onshore winds, in cuts or breaks of a sandbar, near man-made objects such as piers or jetties, or anywhere there are breaking waves, including the Great Lakes.

Those hoping to soak up the sun and swim in Michigan’s great lakes need not worry though, so long as the appropriate precautions are taken. These precautions will be outlined and promoted as a part of  National Rip Current Awareness Week under the theme: Break the Grip of the Rip®.

Here are some safety tips to consider before heading to your favorite Northern Michigan beach this summer.

If you get caught in the grip of a rip current:

Break the Grip of the Rip® this summer by visiting these links for more information on National Rip Current Awareness Week, June 5-11: