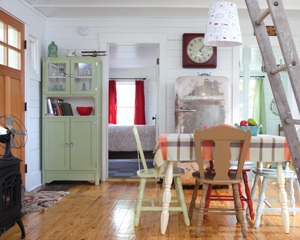 The cabin on Spider Lake near Traverse City was born just after World War II—but it didn’t come of age until last year. Call her Plain Jain until then. A boxy 550 square feet of drab—with the exception of a redeeming view of Traverse City’s tree-ringed Spider Lake and its verdant Public Island. Homely, though, is in the past since the Traverse City couple Eric and Samantha Olsen took ownership of the bland little structure tucked into Traverse City’s cottage country. Most folks would have taken the property for its sandy beach and razed the structure. But as Samantha says: “We’re different that way.”

Different, certainly, if you figure that most couples don’t have the skills of an HGTV crew between them as the Olesons do. Consider their heritage. Eric’s father was a shop teacher. Samantha’s an engineer; his mother was an interior decorator, hers an interior designer. Together they own Blue Sky Building and Design in Traverse City—although Samantha is also a teacher. Among the couple’s favorite pastimes is combing Northern Michigan flea markets, resale shops and home improvement stores for cool deals, then turning them into objet d’home.

When the Spider Lake cottage near Traverse City became theirs, the Olsens ripped into it with their signature gusto and skills: peeling fiber board and ancient insulation flew, the tiled drop-ceiling came down to reveal a peaked roof, the nasty brown indoor/outdoor carpet gave way to the original pine floor—a thorough sanding obliterated old glue marks and rendered the pine boards to their original honey-hue. The Traverse City cottage needed shoring from underneath, so Eric and crew crawled under while Samantha stood in the living room and called out A little higher on the right …

Then the fun began. Samantha chose fresh but vintage-feeling pale blue walls and red window trim to transform what had been a blah tan exterior. Eric rocked the original roof by covering it with industrial-hip corrugated tin. A Craftsman-style door leftover from a Blue Sky job grounded the home in its bungalow-era nativity. And what to do with the shedlike add-on that housed the bathroom? Peak the flat roof, cover the sides in cedar shingles and turn a sorry afterthought into a sweet detail. Further embellishments: a cupola that the couple picked up at a yard sale, the Craftsman-esque portico that welcomes at the front door and windows trimmed out in little wooden awning that Eric built in a spurt of creativity.

The interior dazzles with whitewashed pine walls bathed in natural light courtesy of expansive windows that look out on Spider Lake and a generous skylight that Eric picked up at Odom Re-use in Traverse City for $200. The kitchen includes a 1960’s perfect-condition apartment-sized stove, fresh from a Traverse City senior center apartment and purchased at B & T Appliance in Traverse City. A 1950’s refrigerator that a friend refurbished chills from its place against the wall—equipped with a still-purring Frigidaire engine and T-Bird era graphics that all but say, Whip me up a casserole Baby! The kitchen cabinets are Odom’s salvages, refaced with beadboard and trimmed in finger polish-red pulls from Ikea.  Meet Betty Lou, Eric’s nickname for the cottage, in all her postwar, flirty, homespun glam.

Diminutive as she is, Betty Lou sleeps 10. Count two (or more if you’re talking the Olsens’ teenaged daughters, Sierra and Cecily, and their friends) in the loft that Eric fit under the gables. Bunk beds Eric built into a tiny bedroom can fit two more (usually son Brenn and friend). Add Samantha and Eric in the master bedroom—the room where Samantha has framed and hung the complete set of midcentury baseball pennants she found buried in the wall. And, if need be, another duo can bed down on the plush red sleeper sofa in the living room.

Last summer was the first the Olsens spent with Betty Lou. Though the family lives in Northern Michigan—on Old Mission Peninsula, only a half-hour drive from Spider Lake—they all but moved into the cottage for the summer. There they hung out on the (almost) as-big-as-the-house deck, and boated Spider Lake in a new pontoon and an aluminum boat as old as Betty Lou. All in all, a deservedly sunny payoff for a DIY job well done. As Samantha summs up their labor of love, “Stripping it, cleaning it and making it fun.”