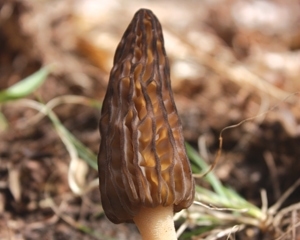 “You can take the girl out of Northern Michigan,” I explain to my climbing partner, Geoff, at our campsite in Yosemite National Park. “But you cannot take Northern Michigan out of the girl.”

He watches as I dance childishly around the picnic table with a spatula in my hand, the smell of butter, fried onions, and morels rising from the camp stove. Large granite boulders flank one side of the campground, a prominent rock band looms through the dense canopy of trees on the other side, and only a few campsites away, park rangers are shooing a black bear into the woods. But I’m lost, momentarily, in the sound of the mushrooms sizzling on the cast iron pan, and in the aroma, which is simultaneously making my mouth water and bringing on a landslide of childhood memories.

I make my living as an outdoor instructor and guide in some of the most spectacular landscapes on the West Coast: in deserts and canyons, and on mountains and glaciers. But even in the most pristine wilderness settings, I find myself hunting for connections to home, to the Leelanau Peninsula, to Glen Arbor, to the Sleeping Bear Sand Dunes and the shore of Lake Michigan. Sometimes, sitting around campfires at night, I find satisfying connections in the way friends or co-workers pronounce the words roof or root (I’m quick to pick-up on a subtle ruf or rut because that’s the way I grew up saying it). Other times, I dig for shared experiences with my students and clients: more often than not, someone admits to a summer cottage in Northern Michigan, usually Petoskey. But today, while climbing in Yosemite Valley, I found the most loaded link to Northern Michigan yet, in a cluster of morels at the base of Middle Cathedral Rock, with the famous El Capitan gracing the foreground.

Geoff and I were walking back to his truck, ecstatic about our afternoon: 550 feet of moderate climbing above the valley’s ambiance of the Merced River, surging waterfalls, large sugar pine, live oak, and maple trees. Our conversation was sporadic, unceasing, and peppered in climbing lingo. But suddenly I stopped walking, stopped talking, stopped giggling, and stared down at my feet. Morels. Three plump, dark morels stood right there in my shadow. Almost squashed.

I bent over, and from ground level surveyed the rest of the scene. There were more.“Geoff, are you in a hurry?” I asked, grabbing my helmet off my pack to put the morels in.

“Drinking beer is my only plan for the evening,” he said.

I picked the morels. For the first time all day, there was total silence between the two of us. Geoff continued leaning against the tree. He laughed at me, and when I looked up at him he pointed to a few morels I missed.

Once my helmet was full, I hoisted my pack onto my back, and our conversation started up again. But this time the dialogue stuck to one subject: moreling in Northern Michigan.

“My dad used to drag me on these epic afternoons of morel hunting,” I told Geoff. “We called it ’shrooming. My mom says he was training me to be an endurance athlete starting at 18 months old.” I described to Geoff how, on several occasions, after hours of following my dad around in the woods, I fell asleep in my highchair, face-planting in my plate of food. Legend has it that the spring I was 3, I could hike over five miles a day without complaining, or being picked up even once.

When we reached Geoff’s truck, we threw our backpacks in the cab, but I cradled my helmet of morels in the front seat. I explained to Geoff that the best way to carry morels is in a mesh vegetable bag, so that the spores can escape and spread as you hike. The other acceptable method in Northern Michigan, I told him, is to use a paper bag to conceal your treasures, so that passersby won’t realize they’re in morel heaven, and then steal your secret spot. “Kind of like when a climbing area is totally sandbagged, to keep other climbers from being interested in it,” Geoff said.

Before heading back to the campground, Geoff pulled into the Village Store to buy beer. Standing in the liquor aisle he asked me, “How do you know where to look for morels?”

I explained my version to Geoff: “My dad used to load all the kids in town into his Volkswagen van and take us to his secret spots. When he noticed us losing interest, he’d holler at us that he smelled some. We would race to him, and he’d lean against a tree and watch as we tried to find the morels he already saw.”

Geoff treated me to the cheapest, most classic malt liquor sold in Yosemite Valley, King Cobra.

“My favorite part,” I confided in Geoff, “was when my dad would cook the morels in the evening.” I picture him, the archetype of a Northern Michigan father, standing in the kitchen with a beer in one hand, spatula in the other, wearing his navy blue sweat pants, the beginnings of a Santa belly poking through his jean jacket, and a smile on his unshaven-for-the-weekend face.

Back at camp, the smell of the butter and onions and the sound of the word morels draws some nearby climbers to our picnic table. “We would pass greasy bowls filled with morels around the living room,” I say. “Some pan fried. Some battered. We’d eat them with our fingers.” The memory invokes a familiar feeling of relaxed, inclusive Northern Michigan community.

Geoff cracks open our King Cobras, and we toast to climbing, to morels, and to my childhood in Northern Michigan. Then we pass a bowl filled with greasy morels around the picnic table, and as a community of climbers in Yosemite Valley, we eat them with our fingers.