Fly Fishing in Northern Michigan: How to Tie the Adams Fly 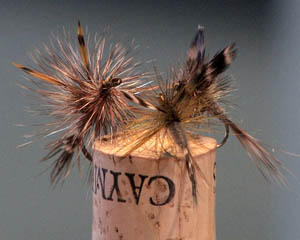 Some history: Back in 1922, Judge Charlie Adams was fly fishing the Boardman River near Mayfield, a tiny burg just south of Traverse City, when he noticed an insect hatch was underway, but he didn’t have a fly that matched the look of the bugs rising from the waters. He walked over to his friend Len Halladay’s house, near Mayfield Pond, and asked the hotelkeeper and fisherman to tie a new pattern. Halladay sat at his table and wound together a body of gray wool and wings from a Rhode Island Red rooster, and Judge Adams headed back to the river with what became, in many people’s opinions, the most widely used fly on earth. Halladay had already created a “Halladay fly,” so he named his latest after his friend. Relive the magic moment: Mayfield Pond is now a park, so tie an Adams fly using our how-to video as a guide, then lay one on the surface of Mayfield Pond. Our expert fly-tying instructor is Brian “Koz” Kosminski, president of the Petoskey Trout Unlimited chapter, called the Miller VanWinkle Chapter.

See beautiful photos and learn the backstory on more iconic fly-fishing flies invented in Michigan.
Click to watch a video demonstration of how to tie the Griffith’s Gnat Fly.
X
X