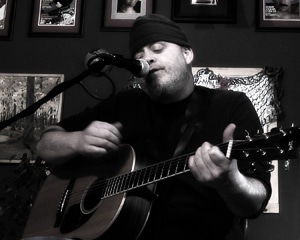 Nathan Bates was a chef before he decided to pursue his life-long love of music full-time, so it’s fitting that his first CD is named Original Recipe.

That also could refer to the fact that he wrote all 12 of the songs on the album.

The Boyne resident recorded the tunes at Freshwater Studio in Boyne City with keyboard-player Joshua Hall and percussionist Greg Vadnais.

Bates’ favorite musicians are Ray LaMontagne, Jackie Greene and Greg Brown. Fans of those musicians should find something to like with Bates’ style, as well.

The CD is available at McLean & Eakin Booksellers in Petoskey and at Freshwater Studio. It can also be purchased on-line at CD Baby, among other places. He’s working to get it offered on Amazon and i-Tunes, as well.

He also sells it at his gigs. Bates plays bars and restaurants about twice a week at this time of year. In the summer, he’ll up that to four or five times a week.

Those shows are a mix of originals and other artists’ tunes.

“I write all the songs I record, but when you play bars and restaurants, you’ve got to play some covers,” he said.

Bates was born in Grand Rapids, but lived out west for several years. He moved back to Michigan from Montana a decade ago.

He worked as a chef at American Spoon Foods in Petoskey, while performing on the side until about two years ago.

“It got to the point where I was making more money as a musician than cooking,” he said.

That may seem surprising in this area of relatively small population and large number of musicians.

“Really, it’s easier here than in Seattle and Detroit,” he said. “Those areas have a lot of people who do what I do, but for free.”