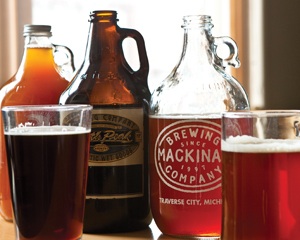 Dubbed the perfect session beer for its smooth equilibrium of lightly roasted malt and subtle hop nuance, the pale ale, or bitter beer, is one of the most widely guzzled in contemporary craft brew culture. Typically sporting a light copper color, pale ale flashes floral, citrus and herbal aromas, smooth medium-weight mouthfeel and afaint residual bitterness. Pale ale, happy to fly solo is also the definitive pal of new and old school pub fare in Traverse City and Bellaire, as its lightly bitter edge complements all things fried, cured, smoked or salted. Read on as we drain the bitter glass Northern Michigan style.

Talking with Dave Hale, Brewer, North Peak Brewing
A refugee from the Detroit suburbs, North Peak’s new brewer Dave hale caught the craft beer fever in the taproom at Bell’s during his college years and followed the foam to to bear school in Davis, California. After apprenticeships in the West, Hale returned to Michigan to brew at Bell’s and Arcadia before joining North Peak last May. We grab Dave for a pint and few words on pale ale.

Pale Ale is definitely North Peak’s signature. What defines your approach?
As a brewer, I’m very style-driven, I want pale ale that tastes like pale ale. That means a beer that is very drinkable and has some bitter character that’s set off by light to medium caramel sweetness. We go for a less aggressive hop presence in our pale ale and focus on balance.

What do you recommend for soaking up a few pints of pale ale?
Pale ale and fish and chips are the proverbial peanut butter and jelly of beer and food pairings, which goes back to the beer’s English roots. Because pales don’t have huge, dominating flavors themselves they can pair with a wide range of foods. I also think of them as the quintessential burger beer.