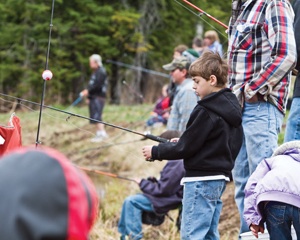 Northern Michigan Events: Driving into Kalkaska for the National Trout Festival on a wet April afternoon, I am struck by the omnipresence of trout. Trout iconography hangs in the windows of brick and clapboard banks, bars and bait shops all along Northern Michigan’s U.S. 31, Kalkaska’s main artery. At the center of this Northern Michigan town, beside the squat chamber of commerce leaps a 20-foot brook trout sculpted from metal and glazed with the glorious blue/red halos and white-tipped fins of Michigan’s legendary native trout.

The Northern Michigan ice is gone from nearby Guernsey and Starvation Lakes, the Boardman, Manistee, Au Sable and Rapid Rivers are stabilizing after spring runoff, and everywhere fishermen have waxed their fly rod ferrules, patched their waders and poured over maps in anticipation of Saturday’s trout opener. Mimicking the ephemeral mayflies themselves, devoted anglers stir from seven months of cold dormancy to stalk trout on the local lakes and streams while Kalkaska celebrates its 75th National Trout Festival.

Conceived in 1934 as a fishing holiday in which all Kalkaska businesses would close, the National Trout Festival can be celebrated as both a hokey circus of bygone Americana and a testament to the essential character of life in Northern Michigan. Armed with a notepad and baited by the acerbic echo of Jim Harrison, whose snarky 1971 Sports Illustrated essay ‘A Plaster Trout in Worm Heaven,’ will forever earn him a free black eye in any of Kalkaska’s taverns, I set out to eat trout with the locals, cheer on the grocery cart races, practice my roll cast and catch some meaning from this goofy and enduring rite of spring.

With the rise of catch-and-release trout culture (i.e., release the trout you catch so their populations may flourish), many anglers like myself have contracted a deep, imagined allergy to trout meat. You are unlikely to stumble across two fly-fishermen exchanging recipes or dialogue about the beneficial fatty acids derived from a diet of wild brookies. Trout Unlimited, the Sierra Club and thousands of regional watershed councils wage endless war against deep injection wells, dams, and golf course developers to protect native trout and their environs. The thought of slipping a blade through the belly of a glimmering spotted brook trout and sitting down to feast on its sweet orange flesh is rumored to cause anaphylaxis of the soul. Walking into the Taste of Trout cook-off at the Kalkaska Trout Festival, however, I let appetite trump ideology and gladly risk my soul for a good meal.

The flavors at the Taste of Trout are a microcosm of the Kalkaska Trout Festival at large: earnest and absurd, delectable and, at times, downright bizarre as local restaurants compete for the double glory of ‘best trout recipe’ and ‘most creative use of trout.’ Traverse Magazine staff photographer Todd Zawistowski and I preside as willing judges, weaving through the packed crowd to sample trout quesadillas, trout pizza, and the Charlie Brown’s Trout Town Café’s trout gyros with mint tzatziki (undisputed winner of the most creative use of trout).

The runner-up designation for best trout recipe goes to an inspired amateur chef whose foraged feast is centered on fillets of wild steelhead taken the previous night at the mouth of the Bear River in Petoskey. Seasoned and lightly smoked over chunks of hardwood, the fish rests on wild rice studded with fresh Northern Michigan ramps and last year’s morels and chanterelles picked from local hillsides by the cook herself.

Kevin Paveglio, executive chef of TraVino, in Williamsburg (near Traverse City), claims Best Trout Recipe with smoked trout in an herb crepe with fig, pistachio, mascarpone and balsamic syrup. Back on the street and buzzing with omega threes, we go in search of angling in progress, the real impetus for all this trout madness.

Each year during the Kalkaska National Trout Festival, C&C Well Drilling, on the south end of Kalkaska, converts its ornamental pond into a kiddy fishing Valhalla for the Children’s Fishing Contest. The crew releases hundreds of rainbow trout into the pond and hundreds of children line its perimeter with bait casting rods, bobbers and wriggling leaf worms. Young laughter ricochets off the tall pines as voracious trout boil at every bait, and small hands toss them thrashing into buckets. There is textbook wholesomeness in these visions of easy grins and flopping trophies. “Watching these families catch trout together really captures the spirit of the festival,” says Ken Waichunas, a Trout Festival coordinator.

While the naïve and suicidal hatchery trout make great prey for the younger set, more serious trout chasing can be found on every river bend and drop-off as seasoned anglers, local and visiting, troll willow spoons, cast spinners and swing streamer flies for a fat, speckled denizen to tip the scales at Jack’s Sport Shop in the Native Trout Fishing Contest, which begins at 12:01 a.m. on opening morning. While this may abrade and even horrify the catch-and-release proponents among us, the pervading attitude is not swaggering and mercenary, as the competing anglers, some still dressed in dripping waders, scramble to make the three o’clock weigh-in.

Out at Ranch Rudolph, Master Casting Instructor Dave Leonhard, owner of Traverse City’s Streamside Orvis, presides over a free fly fishing school where aspiring anglers learn the mechanics of casting a fly line and watch in rapt attention as bits of exotic rooster feather and kinky synthetic fibers are tied to imitate the trout’s gossamer prey, the mayfly. “This is a great opportunity for people to satisfy their curiosity about fly fishing and experience the sport for the first time,” says Leonhard, stressing that providing a friendly environment for kids will help continue the area’s legacy of great trout fishing.

Off the stream and back on Kalkaska’s bustling streets, it’s evident that the Trout Festival, as much as it celebrates our legacy of outdoor recreation, leaves plenty of room for peripheral chintz. I dart across U.S. 31 just in time to see grocery carts race by to cheers and applause. A man in a giant cow costume from the venerated Shetler’s Dairy dances awkwardly and hands out ice cream cones as octogenarian vets in full military dress amble by in the Grand Royale Parade, followed by a clattering band, a trout-inspired Bible float and several seemingly unaffiliated people on horseback. Two blocks down is the traveling carnival with glittery, gyrating rides, brightly painted food stalls hocking elephant ears and cheese steaks and the intrinsically tandem aromas of popcorn and the thickly sweet scent of cotton candy.

Over at the Kaliseum, Kalkaska’s indoor sports complex, microphones are cued up for the elimination round of Kalkaska Idol, where warblers young and old compete in four age divisions for idol status and $275 in cash. I can feel a little of Harrison’s cynicism creep in as a young mother with a neck tattoo pushes past with a stroller, her sullen partner trailing behind smoking. What does any of this have to do with trout? Why isn’t the fishing as good as it was 50 or even 15 years ago? Or wait, is it actually better? As I consider the question, I realize I don’t actually know.

Looking at the faces of Northern Michigan populating the National Trout Festival, almost all of them smiling because they caught a trout or ate a trout or laughed at a trout float or didn’t barf on an inversely spinning carnival ride after gorging on caramel corn, I’ll contend that there is nothing wrong with a little absurdity and nostalgia. By celebrating trout, in various forms, we also celebrate the pristine habitats that support them, the cold, clean waters and vibrant woodlands that drive our tourism industry and bring thousands of people and millions of dollars to Kalkaska and our other communities. We live in or travel to Northern Michigan because of its isolated beauty and pace of life and every April we dig out our optimism and our waders and take to the streets and streams of Kalkaska to celebrate trout.