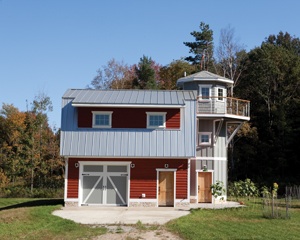 Northern Michigan Cabins: Jim Gibson has spent a lot of time hanging out around—and far above—Lake Michigan. He’s a hang glider pilot and for decades has swirled amid the air currents high off the bluffs of Benzie County in Northern Michigan. Originally from Muskegon, Gibson decided to build a simple weekend cabin in Northern Michigan. When he climbed a tree on a forested 5-acre lot in Gilmore Township and saw Betsie Bay peeking through the bare branches, he knew he had found the spot for his humble garage-with-loft design for his Northern Michigan cabin.

What began in Gibson’s mind as a casual Northern Michigan cabin is now a full-time home he shares with Marzena Frye and their sweet dog, Kleeya. the barnlike structure was inspired by the Northern Michigan property’s former function as an orchard, remnants of which remain in view from the second-floor living space.

The 550 stylish square feet of this Northern Michigan cabin embrace an island kitchen, flexible living/sleeping area, two work spaces, enclosed bathroom and, in the attic, a sleeping space with skylights. A “silo” outside the main structure encloses a spiral staircase an an airy light-drenched office at the top. Some say the house has as much nautical inspiration as agricultural, because the tower looks like a lighthouse with its crown of windows, surrounding deck and marine-cable railing. Either way you see it, the design fits well on this grown-over farmland one mile from the Lake Michigan shore.

Gibson is a mechanical engineer and approaches the project as he would any product design, although he typically applies his skill to medical devices. “Design is design. The principles are the same,” he says.

Space-saving features make the tiny house livable and smart. Custom-built beds hide rolling storage drawers beneath. The kitchen has plenty of counter space due to an inventive cooking solution. Two rolling carts, each outfitted with a single-burner electric induction cooktop, roll out from the ends of the custom-built island at dinnertime. Laundry take up half the usual space with a combination washer-dryer unit by LG that dries clothes by extraction and requires no venting.

Both spatial and mechanical efficiency were important, so Gibson outfitted the house with electric in-floor radiant heat under cement fiberboard and travertine tile. The floor’s high thermal mass paired with good insulation and an aluminum building envelope conserve energy without sacrificing comfort. Everything is electric, and soon Jim hopes to install a residential wind turbine to generate most of the energy.

The aesthetic is as simple as the plan, with whitewashed cedar paneling, a natural wood ceiling, and many classic mullioned windows, even in the ceiling where attic skylights spill light into the living space.

Gibson’s favorite feature of the house is his tower office where he can see for miles and monitor conditions for hang gliding. Even when work keeps him grounded, the windows envelop him with light and breeze, and his tiny Northern Michigan cabin feels as vast as the sky over Lake Michigan.