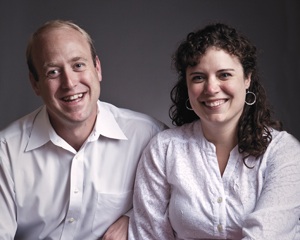 Northern Michigan Attractions: Evolve with a fast-changing marketplace, but don’t lose traditions that built downtown Petoskey. That’s the challenge facing a fresh class of entrepreneurs taking the reins in Petoskey. We check in with 12 Petosky business owners to hear their ideas for the future of one of Northern Michigan's most standout small-town downtowns.

He never thought he’d own the family store, but between undergrad and grad school, Matt Norcross was home working with books at the shop, and he hit it off with Jessilynn, a teacher who had moved to Petoskey to work at her favorite book nook. The two were “blindsided by the fact that we loved the store,” Jessilynn says.

The Norcrosses, both 34, cite modern business principles and a sense of giving as keys to catering to an ever-evolving clientele. “We want our downtown available to people when people are available for downtown,” Matt says. So McLean & Eakin stays open seven days a week, with evening hours. Since 1996 the store has given over $100,000 to Petoskey schools, and gives readers face time with favorite authors. This summer’s lineup of book signings is already packed with lit celebs.

Proof they’re on the right track: Winning major industry awards for bookselling and customer events and a praise-filled column in the New York Times by author Ann Patchett last May.

“In the same way that there’s been a return to local and organic foods, the appreciation of a downtown is coming back,” Jessilynn says. “There’s a fierce sense of independence that’s coming with it, and everybody is breaking the mold. That means that the people who spend time downtown know they’re going to have an experience that they can’t get anywhere else.

Given his inquisitive spirit, it's only natural that this Petoskey native ventured away from his hometown. The son of local notables (Dad is the founder of American Spoon Foods, and Mom was Petoskey mayor), Noah Marshall-Rashid, 31, attended the James Madison College at Michigan State University, then moved on to Chicago and Los Angeles. But he didn't stay away.

"For me, this is home," he says. "In a lot of way it's Old World, and right now it's really affordable. The big city and suburban experiences have worn thin. This is a unique alternative."

Anchor merchant stores go back generations and ground the city's Gaslight District, and Spoon Foods took root here. "We began making preserves in the basement of Kilwin's. When we think about doing new things, like gelato, like the cafe and beyond, we think about doing them in Petoskey."

Noah is inspired by the good turnout at gallery walks and open houses, and anticipates more events like movies in the park for making the district a true pedestrian destination. "I'd love to close off the streets on Friday nights like Traverse City does, keeping shops open later and creating a really fun environment," he says.

As a member of the planning commission, zoning board and YMCA Board of Directors, Noah says he's learned that the shops and restaurants downtown share an important element. "We're lucky to have some really smart people here. It's an easy detail to forget in a small town. This isn't just luck—it's smart people who really work hard to create this sort of atmosphere."

A good window display can make headlines all by itself, and Chris Jaconette knows it, so she hires the talent to make it happen. She’s inspired by the creative storefronts in downtown Petoskey, and her own window arrangements have people gathered in front of Threads boutique each time the window art changes. Chris, 40, is known for her store’s knockout displays that draw people in without using a single sellable item—like a  ball gown made of red plastic cups. “The presentation of the businesses downtown really shows the creativity and entrepreneurial spirit here,” she says.

She finds inspiration for innovation in the surge of young people she sees downtown and the fresh infusion of style from longtime resorter families: “I love having two or three generations purchasing items from the same boutique.”

Formerly the home of Saks Fifth Avenue, the Toad Hall building has stood as an anchor in downtown Petoskey for generations. Now Dave Carlson, 37, a Marine with degrees in political economics, English and 20th Century American poetry, and Debra Carlson, a practicing optometrist, are continuing the tradition of offering specialty gifts to Gaslight District shoppers—but combining that with a forward-thinking market sensibility. “Our most frequent customer is from the Chicago area,” says Dave. “We need to be on the leading edge of trends.”

A member of the Downtown Management Board and the Economic Enhancement Committee, Dave says the city is planning for families, with a recent push to include more outdoor art and green spaces downtown, and with the children’s concert series. “The downtown events have been a big hit. People are getting ice cream and coming into the stores. They’re spending the day here.”

“Next to Traverse City,” Dave says, “downtown Petoskey is the center of economic and entertainment activity in Northern Michigan. It’s small enough to offer the historic feeling of a pedestrian downtown, but large enough to accommodate new ideas and activity.”

He’d like to see a children’s museum, extended business hours, more restaurants and entertainment venues, and the continued development of the waterfront and downtown. Other points on the wish list: a swim area, improved green spaces, development of the railway corridor, better public restrooms and more welcoming entry points.

“We want this to remain a community in which we love to be as a family,” Debra says. “What we do at Toad Hall is reflective of that.”

It’s the Norman Rockwell experience that charms both visitors and residents in downtown Petoskey, says Becky Philipp-Kranig, 38, and that experience is what also convinces people to put down roots here long before retirement.

“This atmosphere makes you feel part of something,” she says. “It’s cozy and fun every day, no matter the season. This is really evident to us when we host nighttime events and over 300 people come out. The people here like to be part of their community, like to get out and do things. They’re looking for stores that provide more than just shopping; something fun with a small-town flair to it. Businesses downtown really recognize that, and that makes it fun for younger generations to be involved, because that’s what we want to do, too.”

Passionate praise for a sandwich—it’s not uncommon to hear at Julienne Tomatoes, and it’s a phenomenon that humbles owners Julie Adams and Tom Sheffler. “Success is something we can never take for granted, says Julie, 41. “On a daily basis we must continue to keep our customers engaged with quality products and superior service.” She says the leadership and community make downtown Petoskey thrive—a reason she and Tom opened the cafe in 2003. “It’s obvious when you come into our town that we take pride in it. The park, the gaslights, the grassy medians, the wayfinder signs—they’re all cool.”

She says she’s looking forward to growth in the Gaslight District, and her wish list includes a butcher, baker and brewery. “Services abound that focus on the development of new businesses. The leadership seems keenly aware of what we have here and takes action to ensure our continued success.”

“My dad’s the president of the company, so what that meant for me growing up was that I was going to go into anything but hospitality,” says David Marvin, 35. At Albion College he studied economics and business management, but when he took an internship with Stafford’s, his destiny became clear. “People asked me questions and I just knew the answers,” he says.

With a sense of history at the heart of his company, David must constantly balance modern conveniences with old-time charm. “There used to be [party]-line telephones,” he says. “Now, we try to be a good example of what’s fresh.” Stafford’s was one of the first environmentally savvy lodging groups in the state, and the hotels rely on a “tremendous recycling program; one that we started long before it was a trend,” David says.

That desire to stay out front extends to the downtown district. “If there’s something going on in downtown Petoskey, our job is to be a part of it,” he says. “If there’s nothing going on in downtown Petoskey, it’s our job to create it.” It’s a great slogan, but it’s also key to making bank for the hospitality company. “We don’t make widgets here, we make memories. As long as we make memories, people are going to come back.”

With three kids, David says he recognizes that catering to families is a big business boon. “Local people know, for example, that Santa is always at the Perry Hotel. So a little boy sees Santa for his very first time here, and decades later he knows he can bring his kids and his grandkids to see Santa here, too. It’s a really neat thing to make that connection.”

With a freshly minted law degree and a new husband from her hometown on her arm, Julie Symons chose family togetherness over far-off fortunes. At 31, she has followed in her father’s retail footsteps, tending fine clothing and accessories in her hip downtown boutique. Her memories are becoming the memories of her two small boys, on the slopes, the beaches and in the woods. And she expects her boys to enjoy growing up on her home turf: “I hear more and more each year about how desirable our area is for young travelers,” she says. “I strongly believe that the Gaslight District has a lot to do with that.” Its strength, she says, comes from merchants who recognize the power of a resort town. “Its quaintness is its best attribute.”

His parents found success in Petoskey, and for Chandler Symons, 40, the future was simple: “How could I be anywhere else? I love my parents and I love the company they started, and I believe in it. Why wouldn’t I take that opportunity?”

Recent beautification projects and extended business hours make downtown Petoskey progressive, he says. What’s lacking is “our front yard.” He’s referring to the entrance to downtown Petoskey, an excavated city block that went into foreclosure in 2010. Purchased in December by an undisclosed buyer, the block’s fate is still unknown.

“We absolutely have to fill that obnoxious hole,” Chandler says.

Also on Chandler’s wish list for downtown: “Public transportation, for the environmental impact it could offer and the ease on the parking burden, and to help in the reduction of drunk driving. Downtown is very happening … and we all know what happens when the sun goes down.”

He digs the cyclical nature of the tradition-packed place. “Petoskey has a really great history. As kids, people came here, and now they come back and bring their own kids. That’s just cool.” He notes that the presence of young families isn’t necessarily a dramatic departure. “Petoskey isn’t changing—the faces are. Petoskey has always had a younger crowd. But now I see so many young people making opportunities for themselves here.” Just as Chandler realized for himself, young entrepreneurs are recognizing that they can have it all, where they want it. “It’s easy to say I could live and work anywhere. But it’s not easy to say I could do that and be happy.”

With a business degree from the University of Michigan, Jennifer Shorter, 36, is moving her family’s store into its 65th year by holding tight to traditional philosophies while modernizing behind the scenes. She’s a member of the Downtown Management Board, the parking committee, the finance committee and is chair of the marketing committee. “When you’re involved you understand more of what’s happening around you as a whole, and you understand how your part is so important. The people who own shops and homes here, they’ve made a conscious decision to be here. So everyone’s working for success. I want to succeed because I want my daughter to succeed here, just as my family has done for generations.”