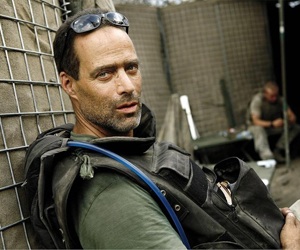 An Evening with Mitch Albom will take place at the City Opera House in downtown Traverse City on Wednesday, April 6 at 7:30 p.m. An internationally renowned author, broadcaster and Detroit Free Press columnist, Albom has penned four #1 New York Times best-sellers, including Tuesdays with Morrie, The Five People You Meet in Heaven, For One More Day and Have a Little Faith. Tuesdays with Morrie became the most successful memoir ever published, spending four years on the New York Times best-sellers list. Albom’s most recent work, Have a Little Faith, was selected by Oprah.com as the best nonfiction book of 2009.

Albom will be joined on stage by host Doug Stanton, New York Times best-selling author (“In Harm’s Way”) and founder of the National Writers Series. The event will include an entertaining discussion about Albom’s life and work, as well as an audience Q&A and a post-event reception featuring a book signing and dessert courtesy of Grand Traverse Pie Company. As a special gift, every audience member of An Evening with Mitch Albom will receive a complimentary paperback copy of Have a Little Faith at the event.

An Evening with Sebastian Junger will take place at the City Opera House on Tuesday, May 17 at 7:00 p.m. Junger is an internationally acclaimed journalist, best-selling author and Oscar-nominated documentary filmmaker. His book "The Perfect Storm: A True Story of Men Against the Sea" earned him the nickname "the next Hemingway" and was adapted into a hit Warner Brothers film starring George Clooney. A contributing editor at Vanity Fair, Junger has won the National Magazine Award and the Dupont-Columbia Award for broadcast journalism, and received critical acclaim for nonfiction books "A Death in Belmont" and "War." In 2010, Junger and photographer Tim Hetherington won the Grand Jury Prize at the Sundance Film Festival for their documentary "Restrepo," a film about the conflict in Afghanistan that went on to win an Oscar nomination in 2011 for Best Documentary.

Stanton will host Junger on stage at the event, which will feature a revealing look at Junger’s life and work. The evening will also include an audience Q&A and post-event reception featuring a book signing and dessert courtesy of Morsels.

Tickets for both events are on sale now to Friends of the National Writers Series and go on sale to the public on Thursday, March 10 at the City Opera House and online at cityoperahouse.org. Tickets for An Evening with Mitch Albom range from $35-75 for reserved seating and include a complimentary paperback copy of Have a Little Faith. VIP ticketholders for the event will have first priority in line at the book signing. Tickets for An Evening with Sebastian Junger are $20 for reserved seating. Friends of the National Writers Series memberships, which are $50/year for individuals or $100/year for families, can be purchased at the City Opera House box office or by phone at 231-941-8082.