Renovation of a Northern Michigan Farmhouse Near Traverse City 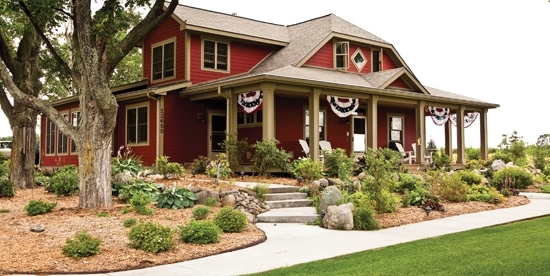 Northern Michigan Home & Cottage: Take a drive up the east side of Old Mission Peninsula near Traverse City, and just past Island View Road you’re sure to notice Bewitched Farm. The classic Northern Michigan farmhouse and barn, each with a crisp coat of deep red paint, are eye-catching in the wide-open field. Only a few years ago, however, this farm near Traverse City looked quite different. The house was dangerously sagging and the barn was deteriorating. The owner of the five-acre property, St. Joseph Catholic Church in Mapleton, put it up for bid, since it was no longer suitable for housing priests or nuns.

It was waiting, it seems, for Roger and Martha Myers. The Traverse City couple was living in a condo and looking for a project property to fix and resell. Their son told them about the place on Old Mission, with its once-grand old barn. Aware of remodeling’s entanglements, the couple discussed the farmstead’s challenges and potential with design consultant Ron Williamson of Mission Bay Contracting & Renovation. The Myerses had worked on a previous home with Williamson and trusted his expertise, so they decided to buy the house and flip it.

Roger and Martha knew that beneath the dated pine paneling and layers of wallpaper the house’s original character could be revived, but they didn’t expect the homestead to have the same rejuvenating effect on them. As they worked, they realized how much they missed living in the country. The place reawakened their youthful energy, and they realized that this house was not simply a real estate project—it was their next home.

But, of course, hurdles remained between that realization and the move-in date. Contractor Jon Ellis made the most troubling discovery: serious structural problems. He worked with an engineer to design a series of five steel beams that now bolster the second floor, replacing the shoddy supports that had somehow held it for a century.

Taking design direction from Williamson and the homeowners, Ellis updated the entire space with classic farmhouse style: oak flooring and trim, custom cabinetry with a distressed paint finish, beautiful custom woodwork and a more open layout. The rooms are filled with the products of Martha’s creativity and plenty of natural light through the new, energy-efficient windows.

Designer Angela Goodall of Kitchen Choreography in Traverse City worked with Martha on the kitchen with its tin ceiling and beadboard backsplash. “The kitchen was designed with elements that reminded Martha of her grandmother’s kitchen,” says Goodall. “The little fronts that open on the wall cabinetry and house spices are very reminiscent of a farmhouse kitchen. The warm, earthy colors and the etched-glass pantry door are true to a home of this period. We used bin pulls and glass knobs, which are quite popular as a style, but originated in a house such as this one.”

Making sure that the adjacent barn and garage (attached to the home by a breezeway) were as tasteful as the home was another priority. The couple worked with Gordon Liechti of Traverse City’s Garage Door Services to ensure that the color and style of the garage doors matched the color and period of the home. Barn restoration expert Jeff Reinhardt of Regarding Your Barn in Northport pitched in to make sure the wonderful old barn was safe and sound. It now serves as a family gathering place, the site of family weddings, parties, and plays performed by Roger and Martha’s 10 grandchildren. When the kids aren’t singing or acting on the stage, they’re pitching tents to sleep in the loft.

Now the couple is busy each spring harvesting their crop of organic rhubarb. Martha enjoys sewing and needlework in the Michigan basement, miraculously brightened and turned into a functional craft room. Outside, Roger tinkers in a new workshop filled with materials salvaged from the old house. After leaving the condo they haven’t looked back, and they’re thankful that the house they revived returns the favor to them every day.

Smart HouseThe Myerses’ farmhouse may look and feel like it’s from a bygone era, but its “go” systems are state-of-the-art. To assure that Northern Michigan’s hard water didn’t ruin the new plumbing and high-end appliances, the crew at Traverse City’s Precision Plumbing worked with the professionals at Pure Water Works in Traverse City to design a Hague Reverse Osmosis water system that softens and filters the water for laundry and cleaning, while providing pure drinking water. And what if a pipe were to break on that new water system when no one is home? A fire breaks out? The furnace quits on a cold winter night? Not to worry, the folks at EPS Security in Traverse City are monitoring the high-tech security system they installed 24/7.—E.E.