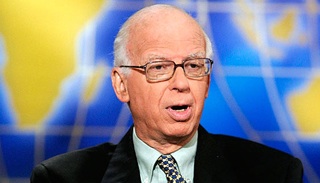 When The Washington Post columnist David Broder passed away on March 9, 2011, he left behind a legacy of political reporting—and this reminiscence of his mother-in-law and his beloved Beaver Island that he wrote for Traverse Magazine in 1997.

Beaver Island’s Keeper of the Past

An impassioned historian and grandmother is remembered for her eight decades on the island.

For 80 summers, starting in 1915 when she was just 13, she had come to this special place at the top of Lake Michigan. And then last January, just after her 94th birthday, Helen Hoffman Collar, the unofficial but much-loved historian of Beaver Island, died.

A few months ago, at the small church just down the beach road from the cabin her father had built for his wife and two daughters, her family members joined her island friends in celebrating the life of this remarkable woman and the gifts her mind and talent had left them.

She grew up in Springfield, Illinois, the daughter of a school superintendent, and though frail in health in her youth, she chose geology as her major at the University of Chicago and began her work in the Texas oil fields—a rarity for women in 1925.

Widowed while still in her 30s and left with two small children, she supported her family from the income of the Indiana farm she and her husband had bought in the Depression, supplemented by sales of fine linens she designed and made on her living-room loom. Each summer, she brought the children to the Beaver Island of her own happy childhood memories.

In later years, as her circumstances improved, she indulged her intellectual curiosity, studying art and history, traveling from the Auvergne to Afghanistan and, along the way, making herself an accomplished amateur painter of portraits and still lifes.

But her great passion—the work of her last half-century—was the history of this island, especially the story of the Irish fishing families who came here in the middle of the last century and whose descendants make up the small year-round population.

Every summer when she returned to the island, Helen would take daily afternoon tea with one or another of the "old ladies," the surviving child or niece of one of the early settlers, and draw from her the tales she remembered hearing her parents tell—of storms and illnesses, of wedding and births, of celebrations and scandals.

In the winter, she would check out this anecdotal history against immigration and land records and census documents, combining visits to grandchildren in Washington with long afternoons in the reading room of the National Archives. Twice, she traveled to the barren island off the west coast of Ireland, from which many of them had emigrated, searching out collateral relatives who had stayed behind.

She began writing the history of the Irish families, carefully sorting the genealogies of the many Gallaghers and Martins and Gillespies and Malloys and the rest—no easy task when often there were 12 or 15 children per generation.

She also collected faded family photographs from her "old ladies," and converted them into sensitive sketches of those long-dead early settlers, verifying with her teatime sources that this one really has a nose as long as the sketch showed, or as weak a chin, or as thick a head of hair.

Today, her sketches and her historical articles and genealogies can be found in the small local museum, which her diligent research inspired others to create.

At the memorial service, three of her grandsons spoke with great affection and emotion of her late husband, a hit-and-run victim whom they only knew from her admiring stories, and of her son, who had a troubled and turbulent life but, despite all his infirmities, willed himself to live just five weeks past his mother’s death.

But mostly they spoke of "Grandma Helen," who seemingly knew the answer to every question a child could ask, who well into her 80’s could out-walk them all on hikes to search out raspberries or loons or whatever else caught her fancy, who would bake the best brownies any of them ever ate, but who gave no quarter to anyone of any age in the after-dinner games of hearts and Scrabble.

Their love for their grandmother was matched by that of the islanders. Claudia Schmidt, the folk singer who knew Helen for the last 20 years of her life, filled the church with her pure, powerful contralto, singing the hymn that she said "fit Helen so perfectly and expressed her philosophy of life."

And young islander Bill McDonough, fresh back from Washington, where he had been invited to meet the visiting president of Ireland (and the president and first lady of the United States), said that it was Helen—friend to four generations of his family—"who gave us our history" and inspired his own devotion to his ancestral land.

And equally to me, who had the good luck to marry her daughter.