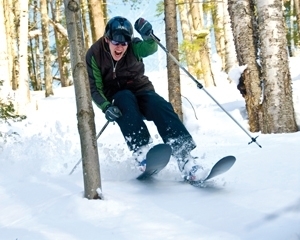 Northern Michigan’s collective spring fever may make us crazy for saying this (we’re ready to duck) but pause those beach dreams and start thinking snow.  Again. With Northern Michigan ski resorts rocking early purchase deals for 2011-2012 season passes, winter just worked its way back into the limelight. But act now, deadlines are approaching.

Deadline, March 31: Shanty Creek Resorts in Bellaire near Traverse City is putting the winter into spring with $219 all-area passes for 2011-2012 season. As if getting to explore 53 runs and four terrain parks free for the rest of this seasons wasn’t enough, the pass sale also includes added ease options for next year, like a $19 preferred parking pass or $29 Creek Care Pass Protection. shantycreek.com

Deadline, April 15: Crystal Mountain Resort & Spa Thompsonville near Traverse City is all about the star treatment, so it makes sense the resort’s Premier Pass for 2011-2012 is on sale through April 15.  Purchase your ticket to ride now for just $219– which gives access to all 45 of Crystal’s downhill runs, two terrain parks, 40 km of groomed XC trails, and pass holder perks (think serious post-slopes spa time at reduced rates). As an added incentive, passes purchased during the spring sale register you for the chance to win a two-night getaway for up to four people in the Cottages at Water’s Edge, just steps from the lifts. crystalmountain.com

Deadline, April 30: Boyne Highlands (Harbor Spring) and Boyne Mountain (Boyne Falls) in Northern Michigan are offering discounts as steep as 30-percent off for passes purchased on or before April 30.  Skiers and riders can choose from multiple pass options—including a college student flat rate of $279—and can lock in spring prices with just $50 down.  With all the standard bonuses of a Boyne pass (think reduced lodging and up to 10 days free skiing at sister resorts like Big Sky), the deals are enough to make anyone pull their woolies out for one last run.  Good thing, since folks who buy a 2011-2012 pass now can ski at Boyne Mountain free through April 10.  For full details visit boyne.com

Deadline, Early October: Nub’s Nob in Harbor Springs will let folks hang up their skis and kick into full flip flop mode before the 2011-2012 season pass specials hit.  This Northern Michigan ski area holds off on its 10-percent early season discount until Labor Day, and extends the offer through early October.  Multiple pass options and family discounts make the deals for this award winning day resort worth the wait. nubsnob.com