Northern Michigan Golf: Rounds Up at the Gaylord Golf Mecca in 2010 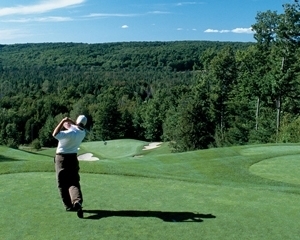 Northern Michigan Golf: Time to get out those clubs. All indications are that the Northern Michigan golf season is going to swing. Stats recently released by the Gaylord Golf Mecca show that Gaylord golf courses enjoyed a positive year in 2010 with rounds increasing 4% from the previous year.

The Gaylord Golf Mecca courses are comprised of five resort destinations and a total of 21 courses that make up the golf destination in and around the alpine village of Gaylord, Michigan. The courses collectively did over 260,000 rounds from mid-April through mid-October.

"The golf industry has been a rough ride over the past five years for golf courses and resort destinations due to the tough Michigan economy", said Paul Beachnau, Executive Director of the Gaylord Area Convention and Tourism Bureau. "We are optimistic that the uptick in rounds is a positive sign that the Michigan economy and consumer confidence is improving."

The Gaylord area courses out performed the State of Michigan overall rounds played, which were still down 1.6% from the previous year, as well as national rounds, which were down 2.3%, according to Golf Datatech, a golf industry research firm based in Kissimmee, Florida.

"With the Michigan economy and confidence somewhat improving, consumers are looking for great value when taking golf trips and our courses have been offering great value. Consumers are also staying closer to home versus taking a golf trip to out of state destinations like Myrtle Beach, Pinehurst, or Florida, which will benefit not only Gaylord, but other golf destinations in Michigan as well."

Kevin McKinley, director of Golf at Treetops Resort in Northern Michigan, who serves as the Chairman of the Gaylord Golf Mecca, believes factors such as the Michigan auto industry rebounding and the Pure Michigan campaign having a positive affect on rounds.

"The past few years saw the auto industry reach an all time low, which negatively affected the Michigan economy and our golf business in Gaylord, which has been dependent on the big three and its suppliers for over twenty years", said McKinley. "Last year we saw the auto industry stabilize, GM make a comeback, and jobs starting to return, which we believe is improving consumer confidence and getting people back out traveling, even if it is within Michigan and closer to home."

"We also believe the efforts of Travel Michigan and the Pure Michigan golf campaign over the past few years, including the use of local Gaylord footage in national media buys, has helped to increase our out of state golf business, which is higher then it ever has been", continued McKinley.

The golf industry in the Gaylord area is one of the leading economic industries employing 1,077 employees with payroll over $10.5 million, and property tax contributions of over $1.1 million. Not bad for a small northern Michigan town with a population of 3,600.
For more information about the Gaylord Golf Mecca, visit gaylordgolfmecca.com or call (800) 345-8621.