Making Room for Family in a Walloon Lake Cottage Near Petoskey 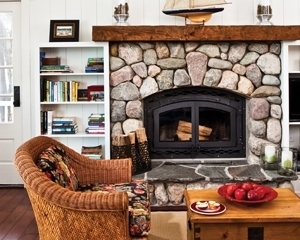 After a decade of weekending with their three children in an 800-square-foot Walloon Lake cottage near Petoskey, Thom and Marianne Barry could tell “Not So Big” architect Sarah Susanka a thing or two about small spaces. “You learn to get along,” says Marianne, who still has fond memories of those early years in their Walloon Lake cottage.

Eventually, however, the close quarters, lack of closets and other conveniences in the 1950’s-era knotty pine getaway near Petoskey took their toll. “We loved the quaintness, but it was so tight,” remembers Marianne. “We wanted a little more room for family and friends.”

Despite the home’s limitations, the couple never thought about selling. “This is such a great part of Walloon Lake,” says Thom. “Sitting out on the deck in summer, you feel like you’re in a treehouse.”

Because the house was part of Walloon West, a one-time 1950’s fishing camp and one of the lake’s oldest associations, the Barrys were limited to working within the cottage’s existing footprint. The challenge forced them to build better, if not bigger, says Greg Presley, a Northville architect and friend who was brought in to help and has his own 800-square-foot cottage nearby. “Too many people see these houses as tear-downs,” he says.

Presley’s original drawing included adding a walkout lake level and a full second floor with a master suite, a plan the Barrys eventually rejected. “They looked at how they used the cottage and ultimately decided they would rather live simply in a smaller space,” he says. “After that, our goal became to maximize the home’s small footprint.”

To do so, Petsokey builder Trevor Doublestein added 400 square feet in a second-floor loft and another 400 in the walkout lower lake level, doubling the cottage’s size. A combined, open-plan living, dining and kitchen replaced the original small, cramped rooms, giving the family space both to relax and to entertain. Presley stretched wall heights from 7.5 feet to 10 feet to let in more light, allowing for new transom windows over the kitchen cabinet wall and the wall facing the lake. “The lot is quite shady, and capturing more light while maximizing the view was a priority,” he explains.

White beadboard paneling and easygoing interiors by interior designer Noni Pace Morgridge of Pace Interior Design in Petoskey unite new and old spaces. “We wanted to keep the feel of a vintage cottage by using simple, classic materials,” she explains.

The Walloon Lake cottage can sleep up to 20 people comfortably now, says Presley, but also functions perfectly for two. The family recently housed 11 guests for their daughter’s summer wedding.  In winter, Thom and Marianne often head up for the weekend, when they enjoy cross-country skiing or snowshoeing. “I also like to sit by the fire and read,” says Thom. “I like the peace and tranquility of it all.” The couple closes off the upper and lower levels when they visit alone. “It’s less to clean,” says Marianne.

When the kids—now 22, 26 and 30—visit, the Barrys especially appreciate the extra space. The upstairs loft sleeps eight, and the lower level has a family room with a large screen TV and extra full bath. “There’s enough room to be together, but also enough space to be apart,” says Marianne.

For Marianne, those family reunions are part of a long tradition of enjoying time together and were one of the main reasons she decided to renovate. “If you make a place they want to come, you can draw the bees back into the nest,” she says.While there was some concern when the renovation started, association neighbors have been enthusiastic, says Presley. “All along, we made an effort not to affect anyone else’s view. We didn’t want to show up the other houses in the neighborhood. We wanted to fit in, and I think the house does that. It’s not ostentatious in size or details. It’s a good neighbor.”