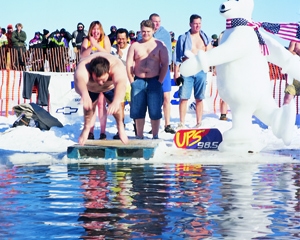 Traverse City Polar Plunge: If there ever was a good cause to go jump in an icy Northern Michigan lake, raising funds for Special Olympics is it. On Saturday, February 26, that’s just what a slew of Traverse City area personalities will be doing in Lake Michigan in front of the Holiday Inn West Bay in Traverse City. Traverse City TV personalities from 9&10 News and Fox 32 who will be taking the Polar Plunge include anchor Phil Buehler, reporter Chivon Kloepfer and reporter Kelly Davis. A team of about 20 workers from Pugsley Correctional Facility near Traverse City will be plunging as well.

Anyone can take the plunge for a minimum donation or pledges of $50 and pre-register online at somi.org. Individuals who don’t want to plunge can also collect donations to receive incentive prizes that bare the “Too Chicken to Plunge” logo and to attend the post-plunge party. The annual LETR Polar Plunge is known for its zany costume contest where plungers compete for the Golden Plunger Award. The award honors the plunger with the most creative costume or best jump into the water.All plungers receive incentive prizes and an official 2011 T-shirt. Donation incentive prizes include a Polar Plunge blanket, a Polar Plunge sweatshirt or a Polar Plunge jacket. Funds are raised by collecting donations from friends, family, co-workers, neighbors, etc.

The Polar Plunge is made possible by the Law Enforcement Torch Run®, a group of police officers and corrections personnel committed to raising funds and awareness for SOMI. Proceeds from the Polar Plunge support the year-round sports training and athletic competition for 18,621 children and adults with intellectual disabilities who live in Michigan.