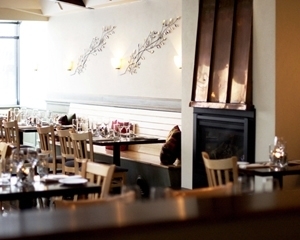 Rustic cuisine in downtown Traverse City. A warm, cozy atmosphere. Affordable food. That’s what the folks at The Bay Leaf in Traverse City have been offering up since the restaurant opened its doors in early December, and so far, the response has been very positive. A few items on the menu of Traverse City's newest bistro: white tiger shrimp sautéed with Mexican-style chorizo and finished with shrimp butter; poached pear salad with blue cheese, spiced pecans, baby spinach and Dijon vinaigrette; pan-seared sablefish with melted leeks, roasted fingerling potatoes, sautéed mushrooms, and a fish fumet cream sauce; and a burger that’s not like any burger you’ve tasted before.  And it comes as a surprise to some—you can enjoy an entrée and a glass of wine for under twenty-five dollars. MyNorth talked with General Manager Dennis Fitzpatrick about this unique new dining experience on Park Street, around the corner from Traverse City's Front Street.

MyNorth: Explain how you came up with the concept for The Bay Leaf.

Dennis Fitzpatrick: We had this idea for good simple food with a European flair, but we wanted to feature foods of the Midwest on the menu as well.  We wanted a menu that could change daily with various specials. And I decided that it was time to create an affordable wine bar in Traverse City.  We offer more than fifty wines by the glass, starting at five dollars. Most of the wines are five to eight dollars a glass, and they’re good wines, from boutique wineries; great cabernets and chardonnays.  We have a bar separate from the dining room where we offer small plates and full dinners. Many wines are offered by the half glass as well. We offer micro-brews, too, and many are from Michigan.

Dennis Fitzpatrick: Yes, in fact, this week we’re starting what we call wine flights. You get a little wooden tray that holds three glasses. You might have three different cabernets:  one from France, one from Napa, maybe one from Argentina, so you can compare the different flavors. It’s a fun and educational process. It might be malbecs one day, or sauvignon blancs. Every day, three whites, three reds, and we’ll change it up each day.

MyNorth: Will you feature local wines as well?

Dennis Fitzpatrick: Yes, and you’ll be able to compare the local wines to wines throughout the world. It all comes to “terroir” – the earth, the soil – and that’s what makes the taste so different.

MyNorth: You gutted the former Catch Island Grill near the Park Place Hotel.   Tell me more about how you changed the interior.

Dennis Fizpatrick: We used maple wood and the color of antique sage to create a soft, warm atmosphere. A local judge came in the other night and said, “Wow, it just feels really good in here.” We’ve received very positive feedback.  We feel we’ve offered up something new for the food industry in downtown Traverse City, a new dimension.

MyNorth: You can actually get a whole dinner and a good glass of wine for under twenty-five bucks?

Dennis Fitzpatrick: Yes. We wanted a place where people can afford to come for a meal at least twice a week. A good meal. A good glass of wine.

MyNorth:  You opened your doors on December 7th.  Tell me what it’s been like.

Dennis Fitzpatrick: Every day it’s been building. This past Friday and Saturday night were incredible. Some of our customers are from the new condos on Front and Park across the street, and they’re loving it. One customer said,  “I feel like I’m in Napa!”

MyNorth: What are some of your favorite dishes?

Dennis Fitzpatrick: The executive chef, Adam McMarlin, is amazing. He was trained under a French chef and was – most recently – the chef de cuisine at the Farm House Café in San Diego, CA. My favorite is the hanger steak. It’s so tasty and it’s done over pureed potatoes with bordelaise sauce. He also makes a burger with Black Angus beef served with pickled vegetables on the side, and house-made fingerling potato chips he makes every day. It’s a staple we’re going to stay with.  I really love the lamb shank and the pork shoulder. We had pork cheeks last week as a special that got a great response. His pan-seared diver scallops are incredible.

MyNorth: Is there a local food component?

Dennis Fitzpatrick: Yes, the chef uses as much local as he can. For instance, he gets his lamb from S & S Lamb Co. in McBain, Michigan.  He’s using Cherry Capital Foods to source as much as is possible from nearby farms.

MyNorth: You are only open for dinners at this point. Any plans to expand that?

Dennis Fitzpatrick: Right now, we’re open for dinner Tuesday through Saturday. Our plans are to move to six days a week in the spring and seven days in the summer.  We want people to be able to just stop by for wine and small plates in the bar, but we’re getting so full that I recommend reservations if you’re planning to join us for dinner!